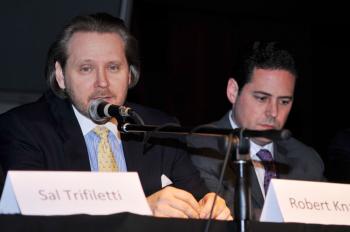 Commercial Lending Down But Not Out

“Everything that happened before Sep. 15 is irrelevant," Knakal said. He was part of an expert panel of specialists in the commercial real estate arena at a function in New York on Wednesday.

Equity is key to obtaining a loan in a commercial lending market that is grinding at its slowest pace in more than 20 years, the experts said.

“Nothing is moving fluidly, credit is easing, but easing at an incredibly slow pace,” Knakal said. He noted that banks are doing things he has not seen banks do in 25 years—the level of scrutiny banks are undertaking is more excessive than he has ever seen.

“They're afraid of making a mistake and being criticized for it… You're negotiating every deal three times today.”

“If I had to think of the single biggest difference between before and now, it's leverage.” There are more pessimistic assumptions in the underwriting—even with 80 percent leverage, he said.

Lowell Dansker, CEO and chairman of Intervest Bancshares Corporation, said his company is looking at 70 to 75 percent leverage for regular portfolios now. “The process has gotten a little more difficult." He said his company is seeing a many new buyers and a lot of refinancing.

His company recently signed off on an $11 million deal on 200,000-square feet of office space on Lower Manhattan’s Varick Street. The deal pays a 6 percent fixed rate for 5 years, on a 30-year schedule. W Financial also closed a deal this week on a 150,000-square foot office building in Brooklyn at 6.75 percent on a 10-year fixed rate.

Winter expected to see a bigger price decrease than what is currently happening in the market.

Most lenders are keeping new construction at an arm's length and requiring that borrowers have 40 percent equity of the building cost, Knakal said.

The lenders agreed that hotel financing is the tightest area right now. With existing projects the hotel operator’s financial condition must be “absolutely stellar,” and the hotel must be in an extraordinary location to obtain financing, Dansker said.

Developer Mike Koulouroudis of Koudis Developments has four plots in the Bronx. On one plot he has confirmation for a 37-unit apartment building but is holding off construction even if he gets financing. Another plot is sitting empty and for yet another, he is pushing for approval to build stores on the ground level only.

Luckily for him, he paid cash, and thus has no mortgage payments.

Today, lenders don't have much faith in personal guarantees and in most cases look at the assets alone, although the inspection of the borrower has become more labor-intensive.

“It's very rare to foreclose on the personal guarantee compared with the asset,” he said. Hornik warned borrowers against selling themselves up to their lenders today. They don't put much faith in guarantees now.

All the lenders on the panel are actively lending, albeit at a slower and more careful rate than in the past. To get a sense of the scale of their current lending, Hornick is expecting to lend around $200 million this year and Knakal hopes to sell 500-600 buildings.

The single biggest issue that the real estate market faces is still ahead, said Knakal, especially when conduit loans come due. Dansker said the difficulties in the real estate business will diminish as the economy improves.

“But conduit deals [are a] totally different story … It's the conduit loans that will cause the most trouble—when they become due they must be paid.”

Deutsche Bank recently reported that two-thirds of conduit mortgages will mature in the next few years.