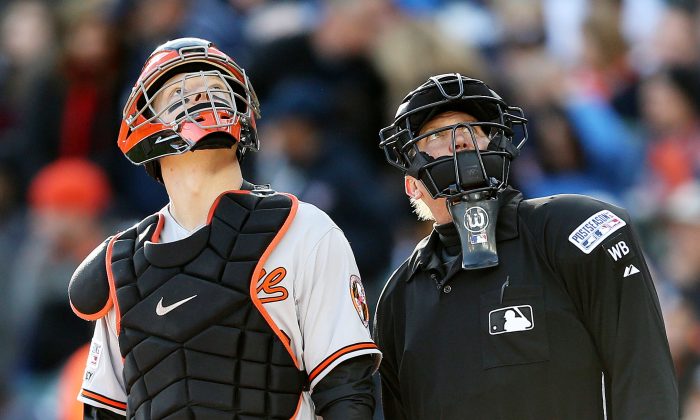 Nick Hundley of the Baltimore Orioles and umpire Jeff Kellogg look up at Comerica Park in Detroit on Oct. 5, 2014. (Leon Halip/Getty Images)
Opinion

Look Up, Americans, It’s Not as Bad as You Think

We are one glum country.

Trust in the federal government is at historic lows, according to Gallup. More than half of the respondents to an October Rasmussen poll think our best days are behind us. And just a few weeks ago, an NBC/Wall St. Journal poll found that the one thing Americans agree upon whatever their race or circumstances is that the system is stacked against people like them.

Scratch an American, it seems, and you’ll get a litany of complaints about our representative democracy.

I see this defeatism all around me. When I speak to classes of university students, I almost always ask for a show of hands on whether these young people believe the United States is in decline or on the rise. Every time, the room is evenly split. That’s a lot of people who are losing faith in our system.

So I have just one thing to say: Could we all take a deep breath?

For one thing, we deal with our challenges from a position of strength. We have friendly neighbors to the north and south, oceans to the east and west, and a growing, relatively young population. We possess abundant natural resources, the world’s most capable military force, a nuclear arsenal second to none, and a deterrent power envied by every other country on Earth. We face no existential threat from foreign powers. We can choose the role we want to play in the world.

We created the major mechanisms for world stability—the United Nations, World Trade Organization, International Monetary Fund, and World Bank—and we still help maintain them. We lead the way in pressing for open markets and free trade. Our fundamentals—from our military to our technology to our system of higher education—remain strong. We’re doing better economically than any other major industrialized nation, and have put more people back to work since the recovery began than the rest of the industrialized world combined. Does that sound like a once-great nation on its knees?

Our people possess strengths in abundance. We have a remarkable reservoir of talent both in the workforce and, to judge by the students I encounter every day, preparing to enter it. We’re blessed with a strong entrepreneurial tradition that nurtures inventiveness and creativity, and that draws countless people from abroad eager to make something of their future. Though we’re hardly perfect on this score, we have friends across the globe who genuinely admire our accomplishments.

I’m not blind to our shortcomings—if you read this column regularly, you know that—or to the severe challenges we confront. But in the face of extraordinary difficulties, we adapt, persevere, and eventually emerge stronger.

After decades of trying, we have begun to wean ourselves from foreign oil. Our response to the Ebola crisis was initially halting and clumsy, but the federal government and the nation’s hospitals reformed their protocols remarkably quickly for a set of complex institutions. It’s taken a long time to put a coalition together to fight the Islamic State (ISIL), but international coalitions are difficult to create, and by dint of hard work we’re better off now than we were a year ago. In the end, government may act slowly, and it’s often well behind where you’d wish it to be, but it does act.

All these things give our society a resilience to keep in mind the next time you see a news story or commentary hyping a pessimistic view of our future. The world around us is in turmoil, under enormous and even volcanic pressures that explode most every morning somewhere, yet we remain an island of stability. We may be disenchanted with our government, yet we’ve come out of the downturn stronger than any other country in the world—a testament not just to our private sector, but to the public policies that supported it.

We have a long way to go, there’s no doubt about it. But I’m reminded of a young woman a few years ago who asked me, after a bleak speech I’d given laying out the problems of the world, “Is there any hope?” My answer now is the same as it was then: Yes, of course there is.