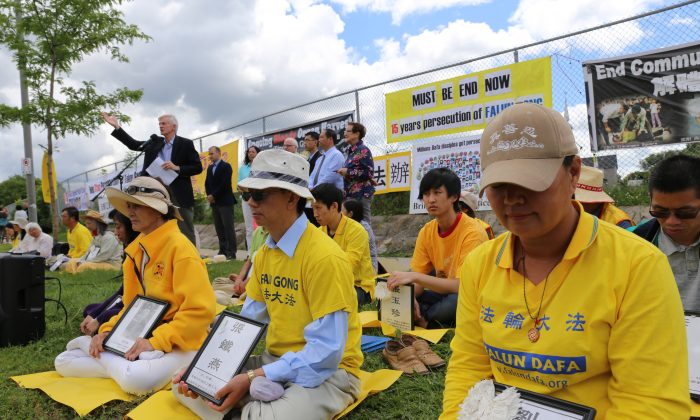 Former MP and Secretary of State David Kilgour condemns the practice of live organ harvesting of Falun Gong prisoners of conscience in China while speaking at a July 17, 2014, event in front of the Chinese embassy in Ottawa to mark 15 years since the persecution of Falun Gong began in China. (Donna He/Epoch Times)
Canada

David Kilgour
Human Right Advocate and Nobel Peace Prize Nominee
David Kilgour, J.D., former Canadian Secretary of State for Asia-Pacific, senior member of the Canadian Parliament and nominee for the Nobel Peace Prize for his work related to the investigation of forced organ harvesting crimes against Falun Gong practitioners in China, He was a Crowne Prosecutor and longtime expert commentator of the CCP's persecution of Falun Gong and human rights issues in Africa. He co-authored Bloody Harvest: Killed for Their Organs and La Mission au Rwanda.
View profile
Follow
biggersmaller
Print

The following are notes delivered by Mr. Kilgour as a representative of the International Coalition to end Organ Pillaging/Trafficking in China and Parliamentarians Against Forced Organ Harvesting (PAFOH), at a public demonstration in front of the Chinese Embassy, 515 St. Patrick St., Ottawa, on July 17, 2014.

Thanks to Alex Neve, secretary general of Amnesty International Canada, Paul Li, a survivor of the persecution, and to all of you for coming today to protest the crimes against humanity that have now continued for 15 years against Falun Gong practitioners across China.

This event is part of a global mobilization marking the persecution of Falun Gong in China launched on July 20, 1999. I understand that vigils will be held across Canada and in various other rule-of-law countries around the world in front of Chinese embassies and consulates marking this day of shame.

We call on the Canadian government to urge the party-state in Beijing to end the pillaging/trafficking of organs and to release the largest group of prisoners of conscience in the world, including six Canadian family members.

Canadian citizen Paul Li’s father, Li Xiaobo, has been unlawfully detained in China since April this year for practicing Falun Gong and is facing a “trial” soon.

Since July of 1999, the campaign against Falun Gong by the Chinese Communist Party through mass imprisonment, torture, propaganda, and coercive “reeducation” has resulted in thousands of deaths.

Tens of thousands of Falun Gong prisoners of conscience have been killed and their organs forcibly removed for transplant operations. Even today, many Falun Gong practitioners are held extra-judicially and torture is routinely used. The persecution has been condemned by human rights organizations around the world.

Falun Gong, also known as Falun Dafa, is a practice of meditation and exercises with teachings based on the universal principles of truthfulness, compassion, and tolerance. In July 1999, fearing that Falun Gong’s widespread growth was overshadowing his political party, then Chinese Communist leader Jiang Zemin ordered the eradication of this traditional Chinese practice.

In 2006, human rights lawyer David Matas and I, as volunteers, completed an independent investigation into the allegations about organ pillaging/trafficking from Falun Gong, which evolved into a 2009-published book “Bloody Harvest.”

The book concludes: “We have come to the regrettable conclusion that the allegations are true. We believe that there has been and continues to be large scale organ seizures from unwilling Falun Gong practitioners.”

Our report in 21 languages can be accessed at OrganHarvestInvestigation.net or David-Kilgour.com. Over the 2000–2005 period we examined, we concluded that 41,500 transplanted organs in China could only come from Falun Gong.

Forced organ procurement in China is unprecedented across the world because organs are sourced from prisoners whose lives are actively terminated to obtain their vital organs for commerce. As Doctors Against Forced Organ Harvesting (DAFOH) have pointed out many times, “The practice shakes the very foundation of medical ethics. It provokes the question: Can one intentionally take a life to save a life? … Thus it is the current focus of … [DAFOH] to call for an end to this unethical practice.”

Many around the world have joined DAFOH in this campaign. In November of last year, for example, 1.5 million persons from 50 countries signed the DAFOH petition to the U.N. High Commissioner for Human Rights, calling for an end to forced organ pillaging.

In March of this year, the European Economic and Social Committee aligned with the European Parliament in condemning China’s “scandalous” organ procurement practices.

In April, the Transplantation Society and the Declaration of Istanbul Custodian Group sent an open letter to Chinese Communist Party General Secretary Xi Jinping concerning “corrupt practices of doctors and officials who obtain organs from executed prisoners illegally for sale to wealthy foreign patients from around the world.”

In short, dear friends, what we are doing today is supported by men and women of conscience in China and around the world.