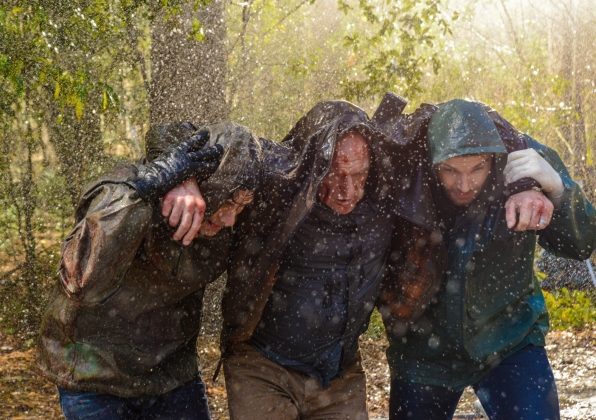 Under the Dome is one of the TV shows set to be explored during the first day of the 2014 Comic-Con in San Diego. (CBS)
Entertainment

The 2014 Comic Con is coming up in San Diego, slated to run from July 24 through July 27–and many television shows will be explored.

The first day has a lot of shows slated, including Under the Dome season 2, Scorpion season 1, and Teen Wolf season 4.

Check out the full schedule below.

Get up close and personal with icons of television! Superstar Betty White (The Golden Girls, Hot in Cleveland) and other TV celebs will answer questions about their work and making history on television. Plus, get a special sneak peek at the animated episode of TV Land’s original sitcom Hot in Cleveland, airing July 30th.

Under the Dome: Panel and Exclusive Sneak Preview

The hit summer series is back for its second season, bigger than ever with higher stakes and catastrophic developments that leave no one safe under the dome. The inhabitants of Chester’s Mill must decide who to rally behind as Big Jim continues to fight for the town’s trust and allegiance, all while resources dwindle and the post-apocalyptic conditions continue to intensify. There are new faces, bigger mysteries, betrayal of alliances, and monumental revelations about the dome, which will lead to a shocking discovery of what is behind it. Journey back under the dome, where you can’t always believe what you see and nothing is impossible. An exclusive sneak preview at what’s to come in season 2 will be followed by a panel discussion with the cast: Mike Vogel (Bates Motel), Dean Norris (Breaking Bad), Rachelle Lefevre (Twilight), Alexander Koch, Colin Ford, and Mackenzie Lintz, along with executive producer Neal Baer.

USA Network’s highly anticipated new television event series, Dig, makes its debut at Comic-Con! From co-creators Tim Kring (creator and executive producer of Heroes) and Gideon Raff (executive producer of Homeland), Dig follows an FBI agent stationed in Israel who, while investigating the murder of a young American archaeologist, uncovers a global conspiracy 2,000 years in the making. The panel will give fans an inside look into this fast-paced international thriller as Tim Kring and cast members discuss the new series. Gideon Raff and series stars Jason Isaacs (Awake, Harry Potter) and Anne Heche (Save Me, Hung) will join the discussion LIVE from location in Israel via satellite for an interactive Q&A. Attendees will be the first to see an exclusive preview from the new series and learn how they can #DigDeeper into the action before the series premieres this fall on USA.

Discover the new CBS drama coming this fall, based on the true story of Walter O’Brien, an eccentric genius with the world’s fourth highest IQ who has created a company of brilliant misfits who use their mental muscle to defend the planet against complex high-tech threats of the modern age. In this high-octane thrill ride from the makers of Star Trek, Transformers, The Amazing Spider-Man 2, and The Fast and the Furious, O’Brien’s team uses their exceptional brainpower to solve the nation’s crises, while also helping each other learn how to fit in. The world premiere screening of the pilot episode will be followed by a panel discussion with the real-life Walter O’Brien, along with series stars Elyes Gabel (World War Z), Robert Patrick (Terminator 2), and Katharine McPhee (Smash), and executive producers Nick Santora, Nicholas Wootton, Alex Kurtzman, Roberto Orci, and Justin Lin.

The saga of Mary, Queen of Scots continues when Reign returns for its second season this fall. Mary and Francis will rule a nation burning with plague, famine, and religious strife. Powerful lords will rise from the ashes, fears and superstitions will take terrifying forms, marriages deemed sacred will be violated; all as Mary tries to save herself and her friends, and Francis learns his true enemy might be his own family. An exclusive sneak preview at what’s to come in season 2 will be followed by a panel discussion with the cast Adelaide Kane (Teen Wolf), Megan Follows (Anne of Green Gables) and Toby Regbo (Mr. Nobody), along with executive producer Laurie McCarthy.

TNT’s new action-packed drama The Last Ship-from executive producer Michael Bay-is the epic tale of the Navy captain and crew of the U.S.S. Nathan James who find themselves in the midst of a global catastrophe that nearly decimates the world’s population. Join the stars and producers as they provide details on the making of the series. In addition, fans will get to enjoy an exclusive sneak peek of the show.

Will “six seasons and a movie” come true? Has Greendale Community College been saved? What happens next to Jeff Winger and the study group? Moderator Michael Schneider, TV Guide magazine’s executive editor, joins Community creator Dan Harmon and members of the cast and producers as they recap last season (including Dan’s heralded return to the show) and discuss what the future holds for this fan-favorite comedy.

Creator and showrunner John Logan is joined by spellbinding stars Josh Hartnett (Ethan Chandler), Reeve Carney (Dorian Gray), and Harry Treadaway (Victor Frankenstein), as the monstrous new series possesses Ballroom 20. Enter the demimonde to find out what moments haunt the writer and cast from the first season and view a sneak peek to see what the cards reveal about the season ahead. The panel will be moderated by Emmy Award-nominated actress and host Aisha Tyler (Archer, The Talk), followed by a Q&A session with the “Dreadfuls.” Penny Dreadful returns to Showtime in 2015.

The Heroes of Star Wars Rebels

The almost 20-year stretch of Star Wars history between Episodes III and IV is a dark time in the galaxy that has never before been explored on screen. The evil Galactic Empire has tightened its grip and only a select few are brave enough to stand against tyranny and ignite a rebellion. Join Star Wars Rebels executive producers Dave Filoni and Simon Kinberg as well as series stars Freddie Prinze, Jr., Vanessa Marshall, Steve Blum, Tiya Sircar, and Taylor Gray for an exclusive preview of what’s to come this Fall on Disney XD in this eagerly awaited television series from Lucasfilm Animation.

The cast and crew of Spooked reveal what’s next for the Paranormal Investigation Team! Executive produced by Bryan Singer (X-Men: Days of Future Past), Sheri Bryant, Jason Taylor, and Felicia Day, Spooked is a paranormal comedy following the “Paranormal Investigation Team” (P.I.T.) as they set out to uncover the awesomeness of the unknown. The show stars Julian Curtis (Captured), Neil Grayston (Eureka), Ashley Johnson (The Killing), Derek Mio (Greek), and Shyloh Oostwald (In Time). Meet the cast and crew, including director Richard Martin and creator Michael Gene Conti, as they look into the show’s future!

Hear ye, Hear ye! Princess Bubblegum cordially invites you to the first ever Royal Ball of Ooo at San Diego Comic-Con! Join panelists for an hour filled with mathematical magic as they screen a royal handful of your favorite Adventure Time episodes, including a world premiere! But wait, there’s more: wear your favorite Adventure Time-inspired outfit for this special celebration and you have the chance to walk away with a righteous prize! Now come one, come all for a ball of laughs, a ball of costumes, and a ball of royal awesomesauce!