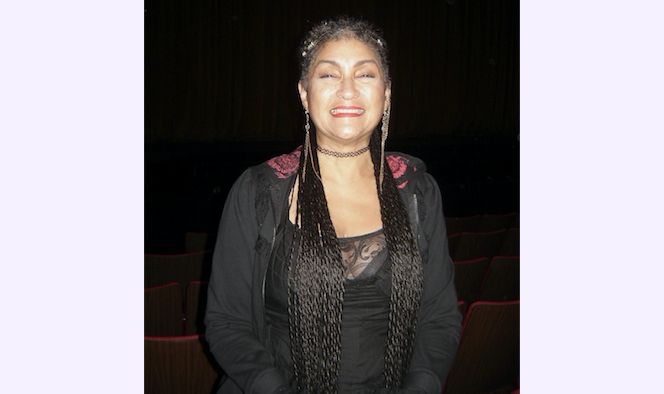 SACRAMENTO, Calif. —In Shen Yun, light but geometric, sparkling pink handkerchiefs were thrown into the air like fireworks, capturing artist and fashion designer Shabwawe Quinn’s attention. The gold, yellow, and blue embroidery of the dragon robes worn only by the emperor was beautiful. A spot of fuschia blooming against white in the costumes of dancers depicting the mystical Udumbara flower was breathtaking.

She heaped praise on the colors of Shen Yun Performing Arts. She said she admired the construction of the costumes, the attention to detail that extended even to the props, and the way the dancers used their costumes.

“The water is fascinating,” in the dance “Fairies of the Sea.” She said the female dancers used fans like “water waving.” They made it look easy, but Ms. Quinn said she knew how hard they worked to attain perfection—especially perfection as a group.

The costumes and colors of Shen Yun made the performance a perfect birthday present for Ms. Quinn. “It’s just so elegant, like a flower, just like a flower.”

“I have to say, it’s breathtaking. My heart is with joy. It makes me feel, like, looking forward to life,” Ms. Quinn said. “That’s how it’s presented to me.”

According to Shen Yun’s website, the clothing of ancient China, like the rest of its culture, is divinely inspired. Some dances require celestial garb, others the ethnic attire of the Manchurian, Tibetan, or Mongolian people.

“The designers stress harmonic balance and contrast,” the website states. “Their objective is an authentic presentation of the attire that comes from China’s divinely inspired traditional culture, and a consummate stage effect.”

What added to the uplifting effect of Shen Yun was that the choreography told a story, Ms. Quinn said. It told of how the 5,000-year-old traditional Chinese culture began from the heavens. It flourished. Communism in China opposed it and sought to suppress it. Artists today are learning the arts and principles of that ancient culture through the Fei Tian Academy that Shen Yun dancers have graduated from. “It was very clear. Very expressive.”

The struggle the communist regime advocates is not something people want, Ms. Quinn said. “We’re better than that.”

What people want is the freedom of expression she saw on stage, she said. It was the belief in a goal and higher purpose, spirituality beyond material gain, and a Creator, that made the art so inspiring.

“Being kind. Understanding. It [performance] said that a lot.” Ms. Quinn said she was glad to hear this message many times throughout the performance.

For the Shen Yun artists “to bring this here is breathtaking to me. I loved it. I almost cried because it was, like, ‘wow!’ So I’m glad that [Shen Yun is] going to perform [at] different places.”