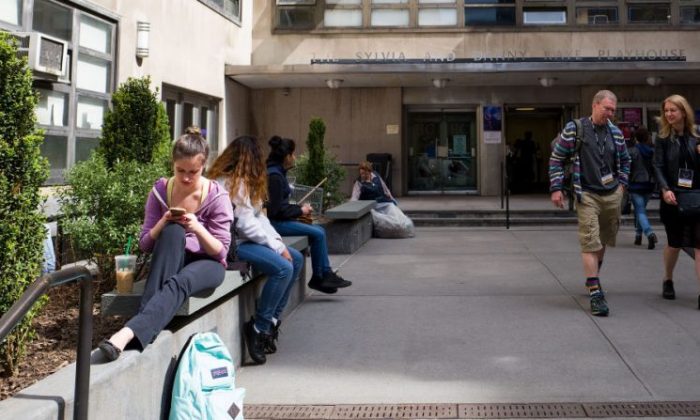 People and students on the campus of Hunter College of The City University of New York, April 10, 2017, in New York City. (Drew Angerer/Getty Images)
US News

A professor at the City University of New York locked her Twitter account after controversial comments blaming “white nuclear families” for racism and white supremacy.

“Part of what I’ve learned is that the white-nuclear family is one of the most powerful forces supporting white supremacy,” wrote Hunter College professor Jessie Daniels, in one of her controversial tweets. The tweets were screenshotted and obtained by the Daily Mail and other online media before they were made inaccessible.

Daniels calls herself a sociologist and an expert on race and technology in her Twitter profile. Her Twitter header photo shows images of books she has written. Two of them deal with race. One is titled “White Lies: Race, Class, Gender and Sexuality in White Supremacist Discourse,” and the other is “Cyber Racism: White Supremacy Online and the New Attack on Civil Rights.”

“I mean, if you’re a white person who says they’re engaged in dismantling white supremacy, but + you’re forming a white family + reproducing white children that ‘you want the best for’—how is that helping + not part of the problem?” wrote Daniels in over the course of two other tweets.

Hunter College is the largest of the 11 colleges in the City University of New York system. The enrollment is dominantly local, with 80 percent of students from New York City and 14 percent from other parts of New York. The largest percentage of student are white, at just over 34 percent of the student body, according to Forbes.

“If you’re white + forming a family w/ multiracial children +not dealing w/ your own racism or systematic white supremacy, how’s that helping?” she wrote in a tweet following the others.

In October this year, a professor at Drexel University, who calls himself a communist, was put on administrative leave after an even more overtly problematic tweet that stated, “All I Want for Christmas is White Genocide,” Turning Point News reported. Professor George Ciccariello-Maher sent the tweet out on Christmas Eve. He followed it up with another tweet that praises the massacre of whites during the Haitian Revolution. When criticized for being racist by another Twitter user, he replied, “White isn’t a race.”

The university responded with a statement condemning the professor’s remarks.

“Drexel became aware today of Associate Professor George Ciccariello-Maher’s inflammatory tweet, which was posted on his personal Twitter account on Dec. 24, 2016. While the University recognizes the right of its faculty to freely express their thoughts and opinions in public debate, Professor Ciccariello-Maher’s comments are utterly reprehensible, deeply disturbing, and do not in any way reflect the values of the University.”

Ciccariello-Maher has continued to send out similar tweets, and is currently advertising an appearance he is holding to discuss his views at events sponsored by socialist organizations, according to his Twitter account. When Drexel was asked about the professor’s unceasing hateful tweets, the school replied, “The recent social media comments by George Ciccariello-Maher, associate professor of Politics and Global Studies at Drexel University, are his own opinion and do not represent the University’s views,” in a statement from the university, obtained by Fox News.