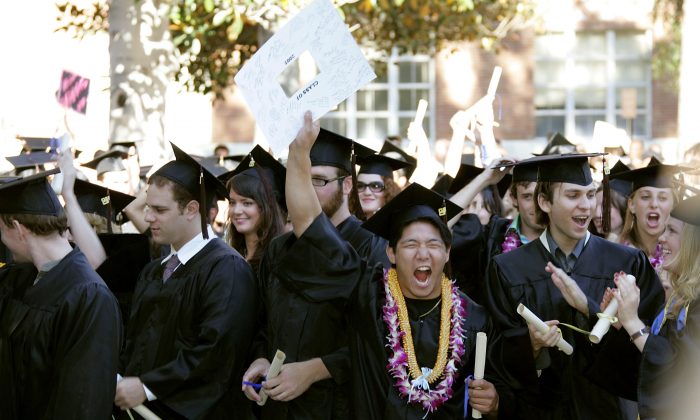 Students celebrate at the commencement ceremony at UCLA's School of Theater, Film and Television on June 17, 2005 in Los Angeles, California. (Photo by Frazer Harrison/Getty Images)
US

PORTLAND, Ore.—Most Americans agree: College is too expensive, and reliance on federal and private loans has increased dramatically. College debt has grown over the past 30 years, with more loans, and higher loan balances per person.

The administration is trying to tackle the problem of student debt.

“Everywhere … I find both a strong sense of urgency about the importance of getting a college education, and a great deal of anxiety about whether middle-class families are getting priced out of college,” Secretary of Education Arne Duncan stated to the State Higher Education Executive Officers Association Annual Meeting in July.

A college student expressed the anxiety he described. Desiree Lukens, an undergraduate at Portland State University, began her college career eight years after her medical discharge from the military.

After leaving the service, “I had no idea what I was going to do with my life,” she said. “School was the best option, my only option. I couldn’t pay for it. Disability wasn’t nearly enough. The Pell Grant wasn’t enough to live off of, so I had to take out loans.”

Lukens has plenty of company.

The Pew Research Center reported one in five households have some form of student debt.

Student debt has become a serious economic issue. President Barack Obama, who felt burdened by debt from his and his wife’s Ivy League educations, according to his autobiographies, has spoken about college affordability many times.

“In the United States of America, no one should go broke because they chose to go to college,” said Obama in a 2010 speech.

The Federal Reserve Bank of New York reported that the majority of graduates owe less than $25,000.

In 1977 Congress banned federal student loans from being discharged in bankruptcy, leaving disability or death as the two options for having student loans discharged or forgiven. People who cannot find good work after school can face unaffordable loan repayments.

In an effort to offer solutions to degree-seekers, the Health Care and Education Reconciliation Act allows students entering college in 2014 more options on loan repayment. Student borrowers can limit their payments to 10 percent of income. Those with a good payment record become eligible for debt forgiveness after 20 years, or after ten for those in public service such as teachers, nurses, and soldiers.

Lukens summed up the fears of many who took the plunge of student loans, “It’s scary out there, I’m petrified about graduating.”