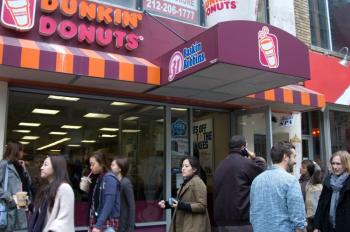 As summer rolls around the corner, coffee shops around the country have ramped up their promotional efforts, offering consumers luring deals on discounted coffee drinks. With coffee shops plastered on every street corner and down every valley, competing brands such as Dunkin' Donuts and Starbucks are coming on strong in a battle to win over the loyalties of consumers across the nation.

Dunkin' Donuts is partaking in Dunkin Donuts’ Free Iced Coffee Day celebrations in which it gives away free iced coffee to customers between the hours of 4 p.m. to 10 p.m. (two hours left to go at the time of writing). Don’t get too excited, though, because if you don’t live in one of 14 locations in which the promotion is offered and aren’t in the mood for iced coffee on May 11, you aren’t getting free coffee.

It seems that some may have mistakenly thought that Dunkin' Donuts' Free Iced Coffee Day is happening nationally, only to have their hopes shattered when they realized that iced coffee from Dunkin' will be free only in 14 participating locations in Arizona, Maryland, New York, Ohio, Pennsylvania, and Virginia. On the company’s Facebook page, donut dunkers around the country are expressing their anger for not being able to get their yearly dose of free iced coffee.

Starbucks, in a calculated move, has been offering discounted frappuccinos at most locations from May 7 through May 16. Between the hours of 3 pm and 5 pm, participating locations will be offering a 50 percent discount on their frappuccinos, or 50% off $4.75 on a large or "venti" size.

Consumers around the country were thus faced the difficult question as they came off of work: to pay $2.50 for a tasty frappuccino or pay nothing for a perhaps-less-tasty but always classic cup of iced coffee – should you be lucky enough to be in the vicinity of a participating location.