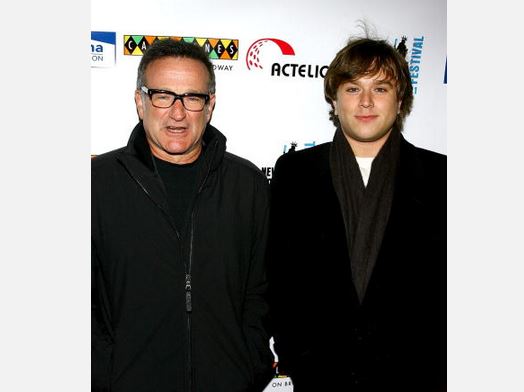 Cody has stayed mostly out of the limelight but his father told Movieline back in 2007 that Cody was extremely smart.

“It’s like living with Mensa. He’s reading Flaubert. Everything is like, ‘Oh my God.’ And he has these debates about totally ridiculous subjects,” Williams said

” He brought home a couch that he found on the street and we said, ‘You can’t, man. It’s full of…’ ‘No, but it’ll be great.’ ‘It will be great when all the creatures come out too. It’ll be like Planet Earth but in your bedroom.’ Then he said, ‘We’ll have to fumigate it.’ ‘Oh, like fumigate it. Put it in a bag and just dust the thing with chemicals that could kill things for the rest of the year.’ And it was interesting to have this debate and he was just debating because he could, just to piss me off. But that’s his job.”

Actor Robin Williams competes with his son Cody for the funniest face after dipping his hands and feet in wet cement at the Mann’s Chinese Theatre in the Hollywood area of Los Angeles Tuesday, Dec. 22, 1998. (AP Photo/Michael Caulfield)

According to IMDB, Cody is in the movie business. he’s credited as a second unit director or assistant director on Maps to the Stars, Trouble with the Curve, Lawless, American Reunion, The Macabre World of Lavender Williams, Mostly Ghostly, and Prairie Fever, as well as an episode of CSI: Miami.

He’s also credited as miscellaneous crew for Water for Elephants, Ocean’s Thirteen, The Last Shot, The Master of Disguise, The Glass House, and Crocodile Dundee in Los Angeles.