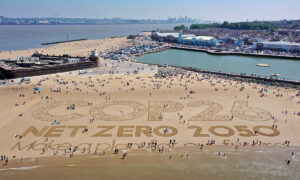 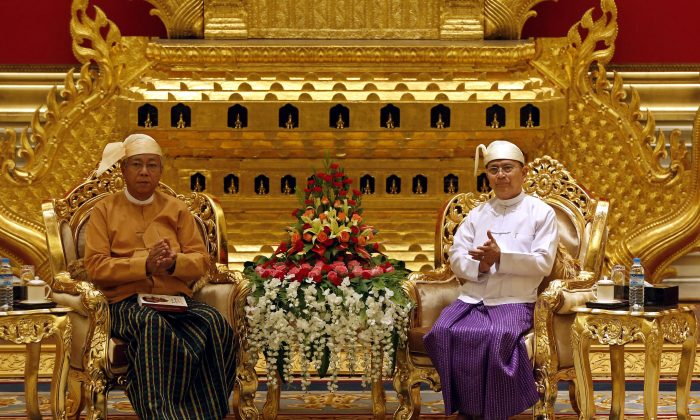 Burma's new president, academic, and long-time NLD stalwart Htin Kyaw (L) and outgoing President Thein Sein (R) during the handover ceremony at the president's house in Naypyidaw on March 30, 2016. A close aide to Aung San Suu Kyi was sworn in as Burma's president on March 30, a role that will see him act as a proxy for the pro-democracy figurehead and carry the hopes of a nation emerging from military rule. (Nyein Chan Naing/AFP/Getty Images)
Opinion

Few people outside Burma will have heard of Htin Kyaw, Burma’s new president. In fact, all but those with a close interest in the Southeast Asian country, where a democratically elected government has just taken power after decades as a military dictatorship, can be forgiven for assuming that the person who would lead the new government would be Aung San Suu Kyi, the symbol of the country’s fight for political reform.

Not so. Burma’s constitution prevents the Nobel laureate from becoming president on the grounds that her two sons are British. There were reports circulating several weeks ago which hinted at the possibility of constitutional change and Suu Kyi becoming president after all. But such a significant change required the military’s approval (which holds 25 percent of parliamentary seats) and they were clearly unwilling to support this particular step towards democracy.

So while it may seem bizarre that having won a landslide election victory, Suu Kyi will not become the country’s new leader, she and her party—the National League for Democracy (NLD)—have manufactured a remedy to this manifestly unjust obstacle. Throughout the election campaign she stated that she will be the de facto head of state and will occupy a position “above the president.” It remains unclear precisely how this will be made to work but, if it is to be effective, it is imperative that the de jure president accepts the role of effectively acting as a proxy. Clearly, it is crucial that the right person be chosen for this unusual position.

The NLD now needs to transform itself from a protest movement into a governing political party.

So what do we know about Htin Kyaw? He is 69-years-old and is a Bamar, the dominant ethnic group in Burma. He is a childhood friend to Suu Kyi having attended the same school for several years. There is some confusion over his educational history—there are widely circulated stories that he studied economics at Oxford University, while his official CV posted online describes him as having graduated from the now-defunct University of London’s Institute of Computer Science. His father-in-law was a founding member of the NLD and his own family is recognized by many in Burma for its literary heritage.

One assumes that Htin Kyaw has no distinct political ambitions of his own, beyond acting as a conduit for Suu Kyi’s will in parliament. His place in Burma’s political history will be determined by how well he serves as the instrument of Suu Kyi and the NLD. As well as acting as the de facto head of state, Suu Kyi has also been appointed to the new cabinet and will serve as minister for foreign affairs.

Human Rights for All

The new government and its de facto head will face many challenges as they seek to meet the expectations of many of its domestic and international supporters.

The NLD now needs to transform itself from a protest movement into a governing political party. Having spent its entire political life rightly condemning the actions and decision of Burma’s rulers, the NLD will now become the object of others’ criticisms and protests. It will be interesting to see how it adapts to this identity change.

Ethnicity is an integral feature of Burmese society: there are 135 legally recognized ethnic communities in Burma. The NLD took a surprisingly large share of the vote in parts of the country where many observers expected voters to support their own ethnic political parties, rather than the NLD.

While it has striven to transcend ethnicity, the NLD remains largely dominated by the majority Bamar. And despite their support for the NLD in November’s elections, many non-Bamar ethnic communities are distrustful of the NLD. The new government will need to retain the confidence of such communities. To that end, a new ministry for ethnic affairs has been established.

International pressure will continue to focus upon the terrible plight of the Rohingya people, described by the U.N. as the one of the most persecuted minorities in the world. The Rohingya are not legally recognized in Burma and were unable to vote in the November election. There is little concerted support for the Rohingya within Burma—and Suu Kyi herself has been criticized for largely talking around what some have described as a genocide being perpetrated against more than a million Muslims.

The spirit and the letter of international human rights norms have been central to external support for Burma striving towards democracy. Many have sought not simply a change in government, but the establishment of institutions which fully support human rights. Democracy without human rights can all too easily descend into a tyranny of the majority, particularly in ethnically divided countries. A key test for Burma’s commitment to human rights will be how Suu Kyi and the new government resolve the plight of the Rohingya.

The prevailing mood among many Burma observers is best described as “cautiously optimistic.” Caution is partly due to Suu Kyi’s failure to unambiguously commit to fully embracing human rights for all within Burma. Let us hope that, either through her own deeds or through those of her proxy president, this particular concern will be quickly dispelled and Burma can emerge as a true human rights success story.

Andrew Fagan is co-director of postgraduate studies at the Human Rights Centre of the University of Essex in the U.K. This article was originally published on The Conversation.