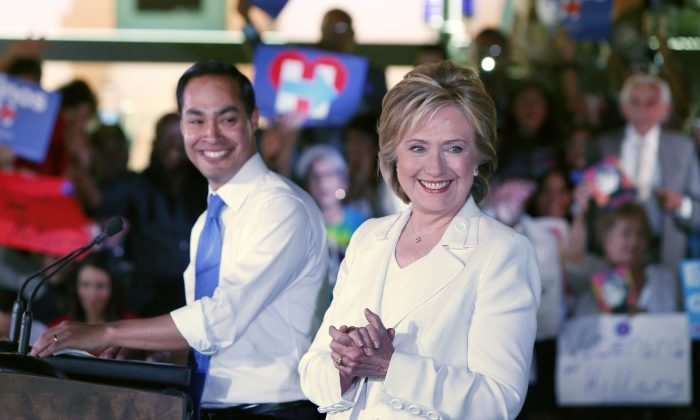 Presumptive Democratic presidential candidate Hillary Clinton has narrowed her list to three contenders. But that list does not include the running mate favored by the public—her Democratic rival in the primaries, Bernie Sanders.

Other names listed in the poll are Senator Elizabeth Warren (D-Mass.), Housing and Urban Development Secretary Julián Castro, Senator Cory Booker (D-N.J.), Senator Tim Kaine (D-Va.), and Senator Al Franken (D-Minn.). Sanders was the only name on the list polled that would have a large positive impact.

Clinton is not considering Sanders as a potential running mate, according to a report by the Associated Press. Instead, she has tapped three of the other candidates in the poll: Warren, Castro, and Kaine.

Elizabeth Warren, 67, is a favorite among progressive liberals, and has been one of the most outspoken critics of Republican nominee Donald Trump. Like Sanders, she’s known for her support of increased Wall Street regulations. Wall Street donors have already threatened to pull their financial support for Clinton if Warren is nominated, according to a report by Politico.

Julián Castro, 41, is a young hispanic Texan, and would bring youthful excitement to the campaign. He was picked by President Obama for his current post when he was San Antonio’s mayor, and would be the first Hispanic on a major ticket.

Tim Kaine, 58, is a well-liked former head of the Democratic National Committee and senator from a swing-state. He’s more moderate than Warren, which makes him less likely to excite the liberal side of the party, but would be helpful in getting support from the bulk of independents and moderates.

Between the three choices, there are two competing philosophies for the decision. Clinton’s campaign could choose a woman or minority to target demographics in the general election, or they could choose a moderate like Kaine to appeal to moderates and Republicans.

Other candidates, like New Jersey’s Cory Booker and Ohio’s Sherrod Brown, face the disadvantage of having their seats replaced by Republican governors, making it more difficult for Democrats to gain a majority in the Senate if Clinton wins in November.

Clinton herself has been vague about committing to any of the choices.

“I’m looking broadly and widely and I’m gonna begin to really, you know, dive into thinking hard about this,” she told CBS News earlier this month. “I’m gonna be looking, first and foremost, as to who I believe could fulfill the responsibilities of being president and commander in chief.”