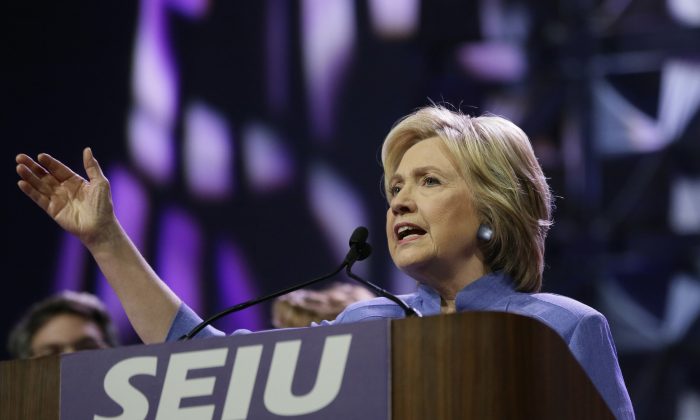 'How can anybody lose money running a casino?'
By Steven Klett

In a speech to the SEIU, a union in Detroit, Michigan, Hillary Clinton questioned Donald Trump’s ability to handle the economy based on his previous experience as a casino shareholder.

“Trump economics is a recipe for lower wages, fewer jobs and more debt. He could bankrupt America like he has bankrupted his companies,” Clinton said to laughs from the audience. “I mean ask yourself, how could anybody lose money running a casino? Really?”

Trump has filed for business bankruptcy four times in the past thirty years—all four filings were for his casino holdings in Atlantic City, New Jersey.

Over the years, Trump has defended his bankruptcies by saying it was never a personal bankruptcy.

“I have used the laws of this country … the (bankruptcy) chapter laws, to do a great job for my company, for myself, for my employees, for my family,” he said last year.

However, Clinton sees this as a weakness, portraying the real estate mogul as unable to hold together his company, let alone hold together a country’s budget.

“What little we know of his economic policies would be running up our debt, starting trade wars, letting Wall Street run wild, all of that could cause another crash and devastate working families and our country,” she noted.

“He’s talking about sending a deportation force to schools, workplaces and homes to round up moms, dads, grandparents, even children. When he talks about ending birthright citizenship, he’s talking about kicking children who are born here out of the only country they know,” she said.

She finished her speech to the SEIU portraying herself as the candidate to stand up to being bullied:

“We need a president who will use the bully pulpit to stand up for working families, but the last thing we need is a bully in the pulpit,” she said. “And nobody knows better than a union like SEIU that the only way to stand up to a bully is to stand up together.”