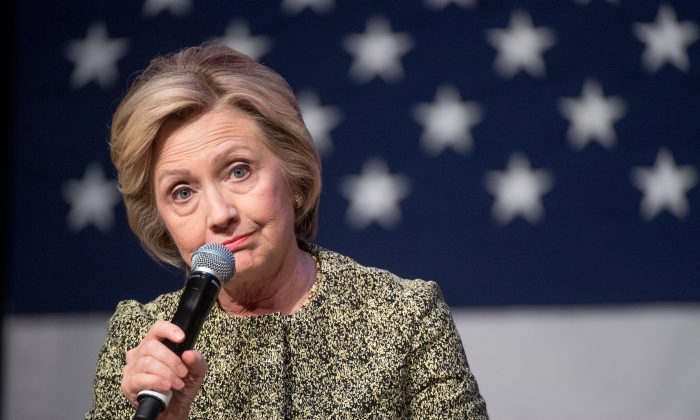 Clinton Campaign: Sanders Is Trying to Rig the Election by Reaching Out to Superdelegates

Sanders has been personally calling superdelegates
By Steven Klett
Print

Hillary Clinton’s press secretary, Brian Fallon, responded on April 11 to critiques of the Democratic primary system, saying that the Bernie Sanders campaign is rigging the election by trying to persuade superdelegates that are already supporting Clinton to support Sanders instead.

“Really, I think when you talk about rigging the system, that’s what Senator Sanders is trying to do now,” Fallon said in an interview with CNN’s “New Day.” “Hillary Clinton has won in the popular vote by a wide margin. She’s got more than 2 million votes over Senator Sanders in all of the contests when you add them all up.”

Really, I think when you talk about rigging the system, that’s what Senator Sanders is trying to do now.
— Brian Fallon, Hillary Clinton's Press Secretary

Currently, the superdelegate count is 439–31 in Clinton’s favor, according to RealClearPolitics.

The Sanders campaign has been making a concerted effort in the last week to reach out to superdelegates, even having the Democratic candidate call to pitch himself after a string of wins in western states.

He wants to try to flip superdelegates and get him to overturn the will of the people as expressed through who’s won the most contests.

Fallon reiterated the fact that Clinton has won more states and more than 2 million votes more than Sanders, and “that’s forcing Senator Sanders to go out and talk about the idea that he wants to try to flip superdelegates and get him to overturn the will of the people as expressed through who’s won the most contests.”

Joe Scarborough, host of “Morning Joe,” said only a day earlier that the Democratic Party’s primary system “is a system rigged against voters.” He was responding to the fact that Bernie Sanders won the majority of votes in Wyoming and still managed to lose the delegate count 11–7 after factoring in superdelegates.