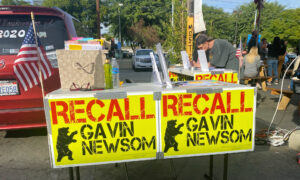 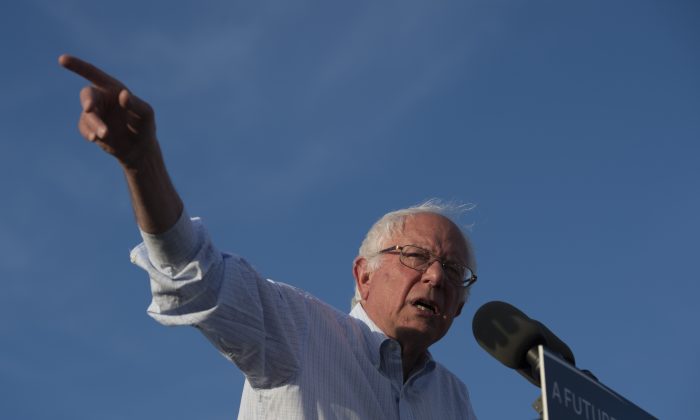 Democratic Presidential Candidate Bernie Sanders during A Future to Believe In rally on June 9, 2016, in Washington, DC. (MOLLY RILEY/AFP/Getty Images)
US

Delegates and supporters of both Hillary Clinton and Bernie Sanders are calling for stronger language opposing the Trans-Pacific Partnership (TPP) trade deal to be included in the party platform.

The letters were sent by delegates and supporters in Connecticut, Ohio, and New Jersey on Thursday and Friday, ahead of a full committee meeting of 187 committee delegates July 8-9 in Orlando, Florida. The letters, which were first reported on by Politico, call for a vote on a finalized version of the party’s platform that opposes the TPP before the Democratic National Convention in Philadelphia starting on July 25.

“It must make clear that we oppose the TPP because of its failure to meet the high standards we believe should be enshrined in our trade agreements,” the New Jersey letter to the co-chairs reads.

The letters were addressed to to Platform Committee co-chairs Dannel Malloy, the governor of Connecticut, and former Atlanta Mayor Shirley Franklin. Fifty-six people signed the New Jersey letter, twenty-six from Ohio, and nine in Connecticut.

President Obama signed the Trans-Pacific Partnership deal on Feb. 4 along with 11 other Pacific Rim countries. The deal has also been opposed by presumptive Republican nominee Donald Trump.

Last month, a drafting committee of 13 members in St. Louis, Missouri, voted down an amendment opposing the TPP, despite the fact that both Sanders and Clinton have publicly expressed opposition to the deal in its current form.

Democrats on the platform committee sided with the opinion of President Obama rather than the candidates. Others, like Cornel West, a Sanders supporter, argued that the issues transcended loyalty to the president. Cornel West was one of the signatories on the letter sent from New Jersey.

Earlier in the week, Sanders sent out the specific language he wanted inserted into the amendment of the platform. It was shared by Sanders’ campaign manager Jeff Weaver in a fundraising email:

“It is the policy of the Democratic Party that the Trans-Pacific Partnership must not get a vote in this Congress or in future sessions of Congress,” wrote Weaver.

“If we succeed, we will be in a very strong position to stop a vote on the TPP and to fundamentally rewrite our trade agreements to end the race to the bottom and lift up the living standards of people in this country and throughout the world,” Weaver continued.

If the amendment doesn’t pass there, then the campaign can present a minority report at the convention if 25 percent of the committee’s 187 members back his opposition to the trade deal, spokesman Michael Briggs told Bloomberg Politics.

“If both Clinton and I agree that the TPP should not get to the floor of Congress this year, it’s hard to understand why an amendment saying so would not be overwhelmingly passed,” Sanders wrote in an op-ed for the Philadelphia Inquirer after the draft platform was released.