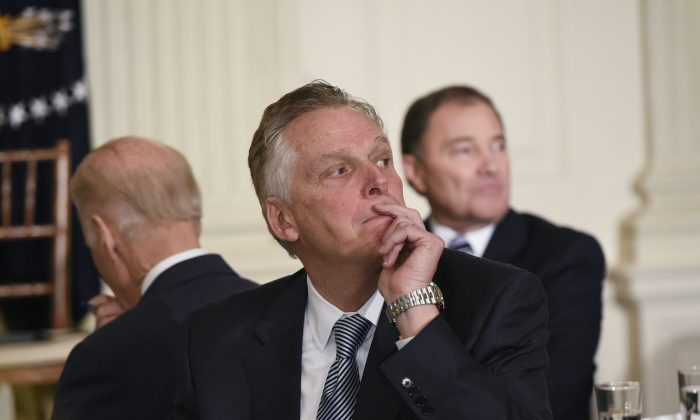 Virginia Gov. Terry McAuliffe listens to a speaker ask a question of then President Barack Obama after Obama addressed the National Governors Association at the White House in Washington on Feb. 22, 2016. (Mandel Ngan/AFP/Getty Images)
2016 race

Clinton Ally Says She Will End up Backing TPP

Longtime friend of Hillary Clinton, Virginia Governor Terry McAuliffe said that he believes that Clinton will support the Trans-Pacific Partnership, a claim that the Clinton campaign immediately disputed.

“I worry that if we don’t do TPP, at some point China’s going to break the rules—but Hillary understands this,” said McAuliffe after his speech at the Democratic National Convention in an interview with Politico.

“Once the election’s over, and we sit down on trade, people understand a couple things we want to fix on it but going forward we got to build a global economy,” he continued.

The Trans-Pacific Partnership has been a contentious theme in the election season, with Republican Nominee Donald Trump and insurgent Democratic runner-up Bernie Sanders opposing the passing of the trade deal through Congress.

Clinton, during the primary season, changed her position from a full-throated endorsement of the trade deal to opposing the trade deal after increased pressure and criticism from her opponents.

Pressed on whether or not she would support the trade deal, McAuliffe was confident that she would reverse her decision to oppose it.

“Yes. Listen, she was in support of it. There were specific things in it she wants fixed,” he said.

McAuliffe’s spokesperson later sought to soften the governor’s comments saying: “While Governor McAuliffe is a supporter of the TPP, he has no expectation Secretary Clinton would change her position on the legislation and she has never told him anything to that effect.”

Clinton’s campaign chairman John Podesta was also swift to rebuke the comments. “Love Gov. McAuliffe, but he got this one flat wrong,” Podesta tweeted. “Hillary opposes TPP BEFORE and AFTER the election. Period. Full stop.”

Love Gov. McAuliffe, but he got this one flat wrong. Hillary opposes TPP BEFORE and AFTER the election. Period. Full stop.

Donald Trump was quick to jump on the statement as well, retweeting the Politico article and attacking Clinton for her support of the trade deal he opposes.

“Just like I have warned from the beginning, Crooked Hillary Clinton will betray you on the TPP.

Just like I have warned from the beginning, Crooked Hillary Clinton will betray you on the TPP. https://t.co/eoNTWK6I8y