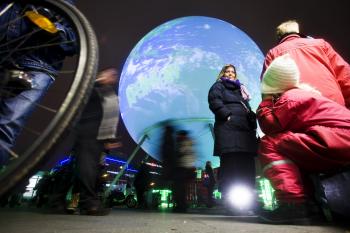 People walk by the gigantic earth globe on the town square in Copenhagen on December 6, 2009, on the eve of the opening of the United Nations Climate Conference 2009. (Mikkel Moeller Joergensen/AFP/Getty Images)
International

The "Climategate" emails made it to the opening address of the hotly-anticipated Copenhagen climate change conference—perhaps not in a way climate change skeptics would have liked.

Dismissing the emails that skeptics say question the prevailing view on climate change, the head of the U.N. body emphasized the multiple lines of evidence pointing to the urgent need to reduce emissions.

Dr. Rajendra Pachauri, chairman for the Intergovernmental Panel on Climate Change (IPCC) said, "The evidence is now overwhelming that the world would benefit greatly from early action, and that delay would only lead to costs in economic and human terms that would become progressively high."

“The internal consistency from multiple lines of evidence strongly supports the work of the scientific community, including those individuals singled out in these email exchanges, many of whom have dedicated their time and effort to develop these findings in teams of Lead Authors in the series of IPCC Assessment Reports during the past 21 years.“

In reference to the claims that the emails had exposed a lack of integrity and due objectivity in the research, Pachauri also offered a tribute to the climate change scientists who he said ”established traditions that ensure high standards of intellectual endeavor and impeccable conduct in the diligent pursuit of our collective goals.”

“In this tribute I find no basis for making any exceptions,” he added.

“The recent incident of stealing the emails of scientists at the University of East Anglia shows that some would go to the extent of carrying out illegal acts perhaps in an attempt to discredit the IPCC," he said.

Two weeks ago, emails leaked or hacked from the Climate Research Unit (CRU) at the University of East Anglia in Britain have been taken by climate change skeptics as proof of a deliberate skewing of evidence, and hiding raw data.

The Climate Research Unit (CRU) says that the emails are taken out of context and are not indicative of anything untoward.

Controversy around the emails has snowballed with further claims that data upon which climate change modeling has been built has been withheld despite requests.

Approximately 15,000 attendees from 192 countries, including 100 world leaders, will attend the 12-day conference on climate change.

On his opening address, Danish Prime Minister Lars Loekke Rasmussen called the summit, which some scientists considers the most important conference of all time, an “opportunity the world cannot afford to miss.”

The main theme of the conference is how to significantly cut greenhouse gas emissions, thought to be the major cause of a climate change.

Delegates from the Alliance of Small Island States, whose members are afraid they could disappear if global sea levels rise due to global warming, are calling for a legally-binding deal including strict emission cuts.

According to observers, such a deal probably won't be reached at the summit, but delegates hope to agree on a framework for a legal treaty that would be signed in 2010.

A third goal is to stop the destruction of the world’s forests by 2030, since the deforestation is one of the contributing factors of greenhouse gas increases. A mechanism called Reducing Emissions from Deforestation and Forest Degradation (REDD) will offer financial incentives to tropical countries to keep their forests intact.

The Copenhagen summit aims to be more successful that the Kyoto Protocol signed in 1997, where 37 countries committed themselves to reduce greenhouse gas emissions.

The most notable non-member of the Kyoto Protocol is U.S., but the current government has declared, just in time for the start of the summit, that the greenhouse gases are a threat to public health.

This move will give the U.S. Environmental Protection Agency (EPA) authorization to order gas cuts without congressional approval. The announcement can also strengthen the position of President Barack Obama at the summit talks.