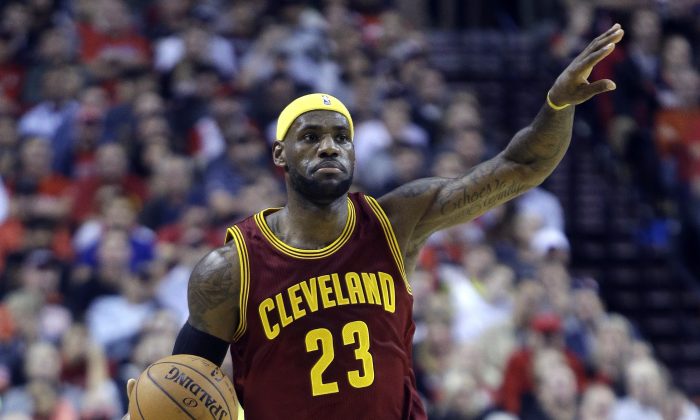 Cleveland Cavaliers forward LeBron James calls out a play as he brings the ball down court during the first half of an NBA basketball game against the Portland Trail Blazers in Portland, Ore., Tuesday, Nov. 4, 2014.(AP Photo/Don Ryan)
NBA

The Cleveland Cavaliers lost to the Wizards on Friday. Here’s some of the latest news and rumors:

LeBron James recently addressed some of the struggles his team is going through.

“No one feels sorry for us,” James said, according to Cleveland.com.

“It doesn’t matter,” he added. “No one feels sorry for us in this league. It’s a winning league and we have to figure out what needs to be done to win.”

James scored 22 points in a loss to the Washington Wizards on Friday.

James noted that his team made too many turnovers, had poor body language, and lacked energy on Friday night.

The Cavs might be looking to trade Dion Waiters, the former No. 4 overall pick.

Waiters hasn’t performed up to his expectations and is losing playing time to Shawn Marion.

Cleveland broadcaster Bruce Drennan with Fox Sports said that he received word from his sources that the Cavs are looking to make a move on Waiters.

“He’s not engaged, not paying attention to the coach, whether he’s in the lineup at that time or not,” Drennan said, via FanSided.

There were also reports the Cavs are looking to trade for Timberwolves forward Corey Brewer.

Kyrie Irving has signed a new deal with Pepsi to do more “Uncle Drew” episodes.

“The success of ‘Uncle Drew’ changed the way all of us at Pepsi now think of digital marketing,” said Adam Harter, a vice president of consumer engagement with Pepsi, via ESPN. “It comes at a time where advertising is going from the interruptive model of trying to get your attention while you are watching something that you want to watch to a model that is more inviting, where people actually want to watch the engaging content that you produce.”

In the videos, Irving dons makeup to look much older than he really is.

Irving also has a signature shoe coming out in January from Nike.

Coach David Blatt noted that communication has been an issue off and on the court.

And he said that Kevin Love is dealing with nagging injuries.

“I think first of all Kev is playing a little bit banged up, number one,” Blatt told Cleveland.com. “He’s not getting his normal volume of shots, truthfully. But that’s the nature of this team. It’s going to come.”

He added: “He has been dealing with some little knick-knack things and he’s not complaining. He’s out there playing.”

But love told the site that he’s fine.

“I’m just trying to find myself in here,” he said. “There are a lot of times I just spot up on the perimeter but that’s what’s being asked of me. So I’m just going to do it and do it to the best of my ability.”