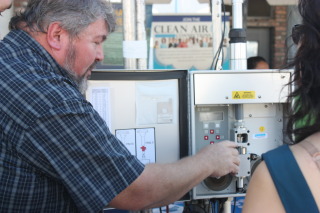 The fair, sponsored by the City of South Pasadena and South Coast Air Quality Management District (AQMD) as well as dozens of other businesses and local media, provided free educational seminars on electric vehicles, organic gardening, and the adverse health effects of air pollution.

AQMD is the air pollution control agency for all of Orange County and the urban portions of Los Angeles, Riverside, and San Bernardino counties, which is the smoggiest region of the United States.

A technician from AQMD stood outside his booth alongside a machine that measures air quality, patiently explaining the process in which the machine captures air, filters it, and measures the fine particles, or particulate matter, that contribute to air pollution.

The result is a quarter-sized mark on a slim sheet of paper: the darker the mark, the worse the air quality. {etRelated16138, 30039}

Professor Ed Avol from the University of Southern California’s Keck School of Medicine hosted a seminar at the fair related to the health effects of children who breathe polluted air. His research focuses on the development of their heart and lungs.

“We’ve done lots of studies looking at thousands of California schoolchildren to look at what affects their health as they grow and if it has anything to do with the air that they breathe,” he said.

“Children growing up in smoggier areas have slower-growing lungs and it’s actually measurable. Not a big difference year to year—it’s only a percent or so a year—but over the decade of growth in their teen years … by the time they’re fully matured, they’ve lost 10 or 15 percent compared to their peers living in a cleaner place.”

While he encourages people of all ages to exercise, Professor Avol cautions that children who regularly exercise in areas of higher ozone—one of the pollutants AQMD measures—have a 30 percent higher risk of developing asthma.

“Be smart about where and when you exercise. … Children living a few 100 meters from a freeway,” he said, “are at higher risk of asthma, lower lung function growth, and more respiratory problems.”

Professor Avol views the effects of pollution from multiple perspectives. Along with the personal costs of poorly functioning lungs, he claims that the societal costs are “huge,” and that the estimated costs for children’s school-related respiratory absences in the Los Angeles Basin alone are $200 million each year.

Unless cleaner air becomes a reality, a whole generation of children that are growing up now will be “destined for poorer lung health outcomes and probably poorer health in the future,” he said.

The fair also served as a venue for carmakers and eco-friendly product-makers to showcase their newest creations.

One such creation that raised eyebrows was Tesla’s Roadster.

Tesla, the manufacturer of all-electric cars, is based in Palo Alto and takes “electric car” to an elite level.

The Roadster, which uses 6,831 lithium ion batteries to power the car, has “288 horsepower at 0 rpm. So it’s just … fast,” said David Waxman, who works at Tesla’s showroom in West Los Angeles.

One charge will travel 245 miles, according to Waxman, and the price to “fill the tank” with electricity is between $3.50 and $7.

One of the more awe-inspiring products displayed at the fair was HH2, invented by Dr. Derek Zupancic.

HH2 is a device that can be installed in any vehicle, and it uses hydrogen to enhance fuel combustion so that up to 98 percent of fuel is utilized, while the fuel and its toxins are incinerated inside the engine, according to Zupancic.

As a result, clean, warm, moist air is released from a car’s exhaust pipe.

“Smell the exhaust,” he said. “We burn all our fuel in the engine at a high speed, a high temperature burn, so nothing goes out the exhaust pipe.”

“It was designed to clean up emissions,” he said. “The biggest problem with smog is existing vehicles.”

While those who use his product remain users of fossil fuels, their vehicle becomes what he calls a hydrogen hybrid.

The issue of cost is always a question with “green” technologies, given that most existing polluting technologies have been used because they are, or are seen to be, cheaper.

Nodding as he referred to the electric and hybrid vehicles on display around him, Zupancic said, “all these nice new ones are great [for those who] can afford them.”

Fortunately, there are ingenious ways of economically reducing environmental impact, as Zupancic has done.