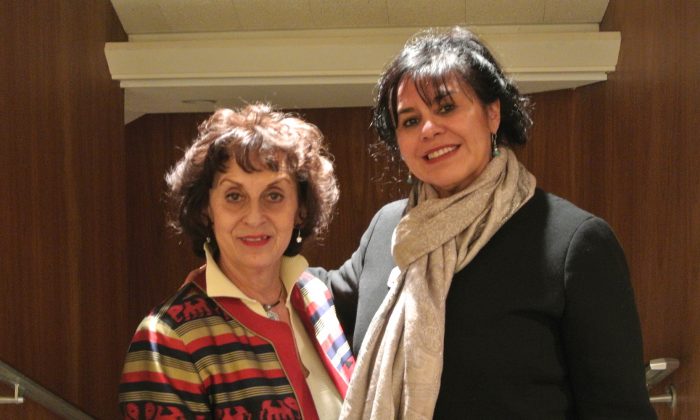 Enthusiastically, she said, “I’m going to come every year. This is fabulous.”

Ms. Lockhart is a classical pianist and a well-known attorney. She has run her own successful law firm for more than 30 years in Northern New Mexico. Ms. Lockhart also served the community of City of Santa Fe as a municipal public defender for 32 years.

In 1982, Ms. Lockhart became the first woman to run for the office of Attorney General in New Mexico. Despite her loss in the 1982 Primary Election, Ms. Lockhart was elected State Chairperson of the Democratic Party representing her state in Washington, D.C., as a member of the National Democratic Committee for several years.

Ms. Lockhart said that she has always loved ancient civilizations, and when she saw advertisements about Shen Yun’s mission of reviving 5,000 years of Chinese civilization, she thought, “Oh my gosh, that predates the pyramids! I have to see this.”

Ms. Lockhart praised the Shen Yun website, “They had fabulous audio, visual presentation that really drew me in.”

The website describes the origin of the company: “In 2006, a group of leading classical Chinese artists came together in New York with one wish: to revive the true, divinely inspired culture of China and share it with the world.”

“For 5,000 years divine culture flourished in the land of China. Humanity’s treasure was nearly lost, but through breathtaking music and dance, Shen Yun is bringing back this glorious culture,” explains the website.

New York-based Shen Yun is an independent, non-profit organization has quickly become an international sensation, with four companies simultaneously touring around the world.

As a musician who started playing piano at the age of five, Ms. Lockhart was enthralled with the music. “The music alone … the music was a concert beyond. I’m a musician. It was just fabulous,” she said. “The orchestra was par excellence. It’s probably one of the best orchestras that I’ve ever heard in my life.”

“A Shen Yun performance features the world’s foremost classically trained dancers, a unique orchestra blending East and West, and dazzling animated backdrops—together creating one spectacular performance,” according to the website.

All of the dance pieces set to original scores played by the Shen Yun Orchestra, which blends ancient Chinese instruments, such as the erhu, pipa, and suona, with a full Western symphony orchestra.

“The sound produced is uniquely pleasing to the ear. The ensemble at once expresses both the grandeur of a Western orchestra and the distinct senses of China’s 5,000-year-old civilization,” explains the website.

Ms. Lockhart said she would order online a CD of the Shen Yun Symphony Orchestra. “It was just beautiful,” she said of the music.

She also said she would send the Shen Yun program book to her family in Dallas.

“Anybody who has a chance should see it. If [Shen Yun] comes here again, I’ll come, absolutely,” said Ms. Lockhart. “It was even more than I expected. It surpassed my expectations. Just Fabulous, fabulous.”