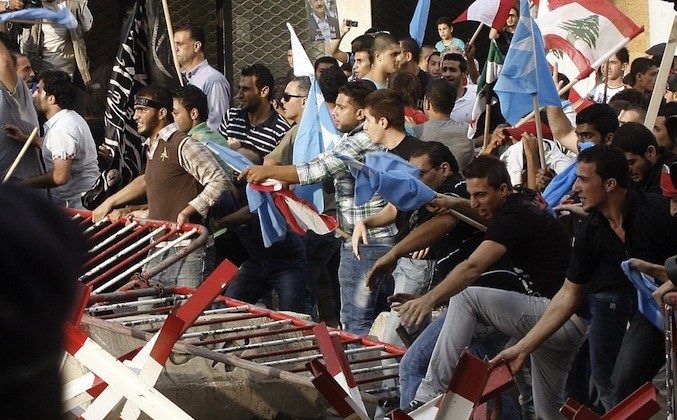 Supporters of the March 14 movement, which opposes the Syrian regime of President Bashar al-Assad, storm the governmental palace in Beirut after the funeral of top intelligence chief General Wissam al-Hassan and his bodyguard, in downtown Beirut, on Oct. 21. Hassan, a prominent Lebanese figure opposed to Syrian President Bashar al-Assad, died when a powerful bomb exploded in a Beirut suburb on Oct. 19, sparking angry calls for Prime Minister Najib Mikati and his government to quit. (-/AFP/Getty Images)
Middle East

Clashes erupted in downtown Beirut on Sunday and protesters tried to break into the offices of Lebanon Prime Minister Najib Mikati after the country’s intelligence chief’s funeral.

During the clashes, Lebanese security forces fired tear gas and shot into the air to disperse protesters, Al Jazeera reported.

General Wissam al-Hassan, the spy chief, was killed by a car bomb in Beirut on Friday.

Protests on Sunday were triggered over perceived Syrian influence in Lebanon, as demonstrators came out to call for the resignation of the government. Some opposition leaders believe Syria was behind the car bombing and say Mikati and Hezbollah, which is part of Mikati’s government, are too closely connected to Syrian President Bashar al-Assad, reported Reuters.

“We want peace, the government should fall but we want that in a peaceful way. I call on all those who are in the streets to pull back,” said Saad Hariri, the leader of the March 14 alliance, according to Al Jazeera, which cited a local television station.

But another protester told Al Jazeera: “The whole country will be shut down until Mikati resigns. We are going to block roads, we are going to protest.”

Fouad al-Siniora, a former prime minister, told protesters on Sunday said that the “government is responsible for the crime that killed Wissam and his chauffeur.”

President Michel Suleiman urged people to work together “shoulder to shoulder” to take on the challenges after the bombing, reported Reuters.

“I tell the politicians and the government do not provide cover to the perpetrator,” he said.