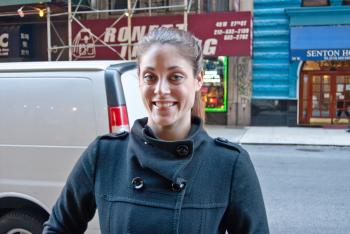 NEW YORK—The alleged mastermind behind the Sept. 11, 2001 terror attacks, Khalid Sheikh Mohammad is set to be tried in a civilian court here in Manhattan, just several blocks from the site where the World Trade Center once stood. Do you think it’s a good idea to have a civilian trial for terrorists in New York City?

Margaux Susi, 21, student, Manhattan
“I think it might just be a little bit too close to home. I think it will bring peace to some people, but it’s going to be more of a show than about finding justice.”

Raj Besai, 44, system analyst, New Jersey
“Obviously it’s something that needs to happen. They should be brought over here and hanged. That’s what I think, personally. Some people are opposed to it, some people are for it. I am not opposed to it.”

Ross Johnson, 24, business consultant, Brooklyn
“It seems almost theatrical that it’s being held in New York. I’m against the death penalty, even with them. Even if I am in New York.”

Marion Pouliquen, 21, assistant project manager, Brooklyn
“I think it’s normal, because that’s where it occurred. With safety, I think it will be just as safe here as anywhere else. I’m against the death penalty. I don’t think anyone should judge that for someone else. Life imprisonment is already a harsh sentence.”

Cedrick Terrell, 38, actor, Jersey City
“My only concern is that the court is going to be under a lot of pressure. If the court says they get 15 to 20 years, New Yorkers will want blood. The courts know if there’s an adverse decision there’s gonna be an outrage. It’s gonna be interesting to see what will happen.”