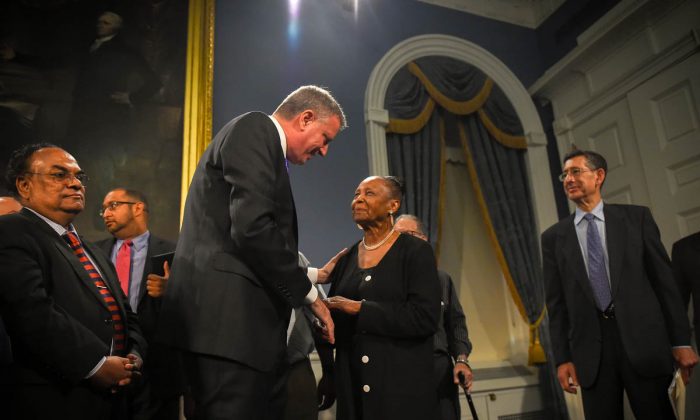 The agreement covers roughly 90 percent of DC 37’s employees and will cost $1.75 billion through 2017. The union members have gone without a contract since 2010 and will receive retroactive raises for the those years.

The agreement is another significant labor settlement for the administration of Mayor Bill de Blasio, who took office with all of city’s union labor contracts expired. Approximately 60 percent of the city’s workforce has now reached contract agreements or tentative deals.

The DC 37 agreement was patterned after a deal reached with the United Federation of Teachers and ratified in June. Like the teachers union, DC 37 will have to come up with $795 million in healthcare savings to offset the cost of the raises. The specifics of how the union will reach the healthcare cost savings are yet unclear, but are enforceable through arbitration.

Union members still need to vote to ratify the contract. The ballots are expected to go out as soon as next week.

“We have come to an agreement that we think is very strong, very well thought out, and one that we think will find great favor with the members of this union,” de Blasio said at City Hall on Wednesday.

The mayor praised Robert Linn, the city’s director of labor relations, for bringing DC 37 and other union contracts to an agreement. The mayor said that he had set a goal for Linn to reach an agreement with one half of the city’s union’s by the end of 2014. Linn has already satisfied that requirement halfway through the year.

The union settled for a lower rate than did the UFT, but Lillian Roberts, DC 37’s executive director, said that she believes the members will nevertheless ratify the deal.