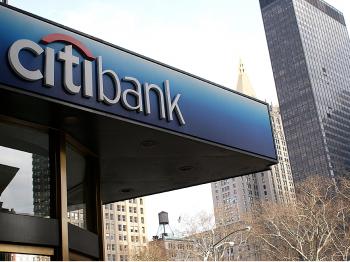 A Citibank in New York City. Citigroup is the last large bank to pay back U.S. taxpayers the TARP funds it received as part of the government's stimulus package this year. (Charlotte Cuthbertson/The Epoch Times)
Business & Economy

The nation’s second-largest bank holding company has tried for months to escape the grip of federal government influence, and reached an accord with the Treasury a week after Bank of America Corp. paid off its obligations.

Citigroup received about $45 billion in Trouble Asset Relief Program (TARP) funds, but the remaining $25 billion was converted to stock earlier this year—with the Treasury as 34 percent shareholders of the company.

“The TARP program was designed to provide assistance until banks were in a position to repay it prudently,” Citigroup CEO Vikram Pandit said in a statement. “We are pleased to be able to repay the U.S. government's trust-preferred securities and to terminate the loss-sharing agreement.”

In an agreement with the bank, the Treasury will concurrently sell around $5 billion of common stock it holds.

“As I have stated many times over the past year, we planned to exit TARP only when we were convinced that it was prudent to do so,” Pandit said.

By paying back its TARP obligations, Citigroup is no longer under the restrictions of federal executive compensation limits set by President Barack Obama’s “Pay Czar” Kenneth Feinberg.

Banks have long contended that compensation limits hinder banks’ abilities to compete and retain top talent, leading to a flight of high-performing employees from companies such as Citigroup and American International Group (AIG) over the past year.

A few days ago, Feinberg set a limit of $500,000 on compensation for mid-level executives at companies that have received the largest TARP assistance—AIG, General Motors, and GMAC. Citigroup will escape the cap once it repays the government, and Chrysler / Chrysler Financial is waived from the cap because no mid-level executive at the firm makes more than the cap of $500,000.

Some pundits argue that letting big banks repay their TARP funds as quickly as possible could be a surefire way for Wall Street to get back into its old habits.

Economic commentator Michael Hiltzik asked in a column in the Los Angeles Times, “Is the government giving up what could have been an effective tool of leverage over this misbehaving industry?”

Citigroup says it has provided $458 billion in new credit through the end of October using TARP funds, and helped 715,000 homeowners avoid foreclosure.

As of the third quarter, U.S. foreclosure rates reached a record high—one in 136 properties received a foreclosure notice, according to real estate market research firm RealtyTrac.

“These Wall Street banks were rescued by the taxpayers after they almost collapsed under their own bad investments," said Common Cause President Bob Edgar. "They took that money and are spending millions lobbying and making campaign contributions to stop proposals that would help those same taxpayers keep their homes.” Common Cause is a not-for-profit organization based in Washington, D.C.

With most banks having repaid their TARP obligations, will they continue to lend assistance to troubled homeowners?