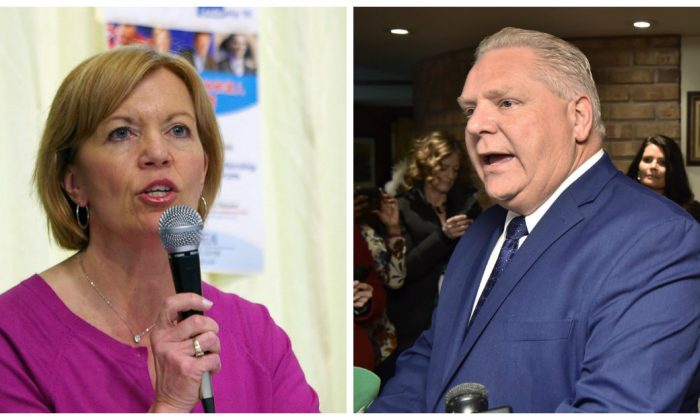 TORONTO—The newly crowned leader of Ontario’s beleaguered Opposition is no longer being challenged by his main rival, who refused to concede for nearly a day.

Christine Elliott met with Doug Ford on Sunday evening to congratulate him on his narrow win in the race to lead Ontario’s Progressive Conservative party.

In a statement acknowledging Ford’s victory, Elliott said she conducted a review and is confident in the results of the race.

“`The pace of this Ontario PC leadership race has been rapid and there have been a number of unexpected turns along the way. That is why our team took the last twenty-four hours to review the results of an election that was incredibly close,” she said in the written statement.

Thank you Christine! You are a great friend and I look forward to working together to put Ontario on the right track. #onpoli #pcpo #pcpoldr https://t.co/mhJGOTJEQ6

“After completing my review, I am confident in the results. I extend my congratulations to Doug Ford on a hard-fought campaign.”

But Ford had brushed off her allegations, saying he was working on restoring unity within the party as it works to topple Liberal Premier Kathleen Wynne’s government in a spring general election.

“Leadership races can be tough on political parties, and for the candidates that compete in them. For me, there was no tougher part than running against Christine Elliott,” Ford said in a written statement later that day, adding that she “represents exactly what we need in public service.”

Elliott previously said she won the popular vote and the majority of ridings, and said thousands of party members were assigned to incorrect ridings during the voting process.

The party sided with Ford, saying his win was definitive. It noted that there had been an issue with the allocation of certain electoral votes but the matter was reviewed and resolved.

Ontario heads to the polls June 7.