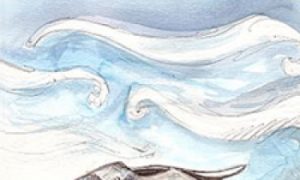 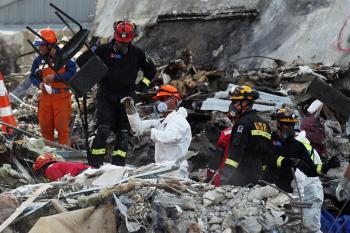 Rescue workers clear out remains from the CTV building on March 1, 2011 in Christchurch, New Zealand. The quake, which was an aftershock of a 7.1 magnitude quake that struck the South Island city on September 4, 2010, has seen damage and fatalities far exceeding those of the original. (Hannah Johnston/Getty Images)
US

By Diane Rowe
Print
While media reports focus on the nuclear crisis in Japan, local people deal with the harsh reality of trying to return to normal life amidst strong aftershocks, following the magnitude 9.0 quake and giant tsunami that struck the island nation on March 11.

On the South Island of New Zealand, also hit by a major quake on Feb. 22, locals are receiving assistance in dealing with the emotional trauma that accompanies natural disasters.

Professor Lorraine Sherr, a chartered psychologist, says on the British Psychological Society's website that people's lives are changed forever whenever a tsunami or an earthquake hits.

"Surviving, living through trauma, panic or injury affect people forever," she notes. "The moment is emblazoned in their psyche and the cognitive impact, the questioning and the emotional trauma unfold—possibly forever."

American psycho-social advisor, Kathleen Whalen, is in New Zealand giving workshops in building up resilience with a programme that will help parents and children affected by Christchurch's double-whammy of earthquakes.

“I am a very firm advocate that we need to really take care of the caretakers…children actually model and receive a great deal of instruction from just how parents and adults in their lives react to situations,” Ms. Whalen said.

Currently working with psychologists and social workers in Christchurch and Wellington, Ms. Whalen worked with Save the Children in New Orleans, following the 2005 Hurricane Katrina disaster.

She says coping mechanisms can help children deal with subsequent aftershocks that reignite the initial fear from the first disaster.

Under the resiliency building programme, children learn how to develop coping skills by using story books, art, music and games which allow them to identify common reactions and emotions not just to traumatic events, but also to everyday stress.

Unlike hurricanes which have a season, earthquakes are "omnipresent" and with continuing aftershocks, cumulative traumatic stress is created, Ms. Whalen says.

Meanwhile, trauma experts agree that the cumulative psychological effects for many Cantabrians who experienced the 2010 September and 2011 February earthquakes and the hundreds of aftershocks, should not be underestimated.

Last month, the government-funded counselling organisation, Relationship Services, reported it had been "run off its feet" since the February quake and was, in fact, still providing support for victims of the 2010 earthquake, according to Radio New Zealand.

International disaster aid agencies have been providing relief for overwhelmed counselling services supporting hundreds of people left in a state of shock, disbelief and helplessness in the wake of the disaster.

“The biggest myth about trauma is that it will go away on its own,” TREST Aid Director, Deepak Mostert said in a press release.

TREST Aid worked amongst the devastation of the Padang (Indonesia) earthquake in 2009, reaching out to 380,000 schoolchildren and teachers.

Emotional Freedom Technique (EFT), a form of tapping into acupuncture points with one's fingers while holding the distress in one's thoughts, is having some success, says Palmerston North psychotherapist Barbara Smith.

“The big advantage of using EFT by this team was they could do very successful sessions working with a big group of people at once, which is hugely useful when there is so much need all at once,” says Ms. Smith, who practises and teaches EFT herself.

She says the tapping technique is “amazingly good” for children. The cancer ward in Hospital General Aurelio Valdivieso in the State of Oaxaca, Mexico has successfully used 'tappy bears' with shiny buttons placed on the meridian points to improve the overall outcome for children for several years.

Every child that goes into the hospital gets their own soft, cuddly 'tappy bear' which they tap with their fingertips to help them get through the fear, pain and stress.

“You can teach it to somebody in one session and that is why it is so good and people will start to feel better from the very first time they do it,” says Ms. Smith.