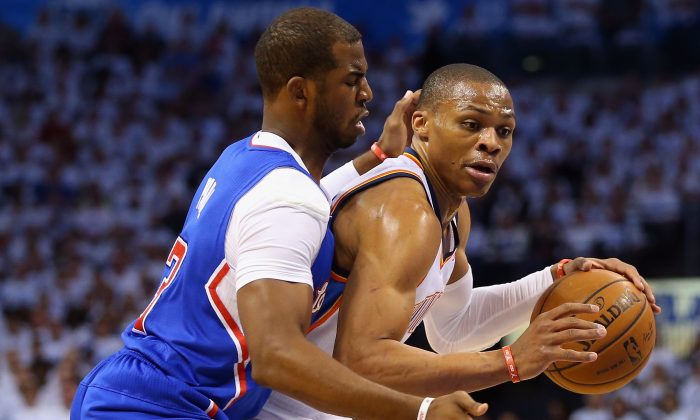 Chris Paul #3 of the Los Angeles Clippers defends Russell Westbrook #0 of the Oklahoma City Thunder in Game Five of the Western Conference Semifinals during the 2014 NBA Playoffs at Chesapeake Energy Arena on May 13, 2014 in Oklahoma City, Oklahoma. (Photo by Ronald Martinez/Getty Images)
NBA

A new study of player-tracking technology has found that Chris Paul is the best perimeter defender in the NBA, while also producing more evidence supporting the defensive prowess of big men Dwight Howard, Tim Duncan, and Roy Hibbert.

The study utilizes data from the NBA’s player-tracking systems, which were installed in 2013 and provided scores of information for last season.

The authors introduced five new defensive metrics to glean information from the systems, in order to better understand the impact that players have on the defensive end of the floor. Volume score, or the total magnitude of attempts that an individual defender faces; disruption score, or the degree to which an individual defender is able to reduce the effectiveness of his assignment’s shots; and counterpoints, or a weighted average of points scored against a particular defender per 100 possessions, are three of the new metrics.

Paul, the starting point guard for the Los Angeles Clippers, was “the best perimeter defender in the NBA” in the 2013–14 season, according to the analyzed data. Paul’s matchups shot against him significantly less often than average last season, everywhere on the court, and when they did shoot they shot at a low efficiency. So he stopped players he was guarding from shooting as often as normal, and also guarded them so well that when they did shoot they missed more shots than normal.

“Paul, a league leader in steals, reduces opponents’ shot frequency more than any other player of his type” in the restricted area, the study authors said in a report due to be published in the Annals of Applied Statistics (PDF).

Alexander Franks and Andrew Miller, Ph.D. students at Harvard University, spent more than a year analyzing the data and coming up with the new metrics with the help of Luke Bornn, who is a professor in Harvard’s Statistics Department, and Kirk Goldsberry, a professor at the Institute of Quantitative Social Science at Harvard.

They submitted a paper to the Annals and are making a presentation on the advanced metrics at the MIT Sloan Sports Analytics Conference in Boston (PDF) this week.

“Their method snaked its way through every millisecond of the 2013–14 NBA player-tracking data set, and estimated who was guarding whom and when they were doing so. Then it quantified the performances of individual defenders for the season, in exciting new ways,” Goldsberry described in an article for Grantland.

An interesting visual representation of a defender’s impact on who he’s defending comes in a shot chart.

“Paul’s chart is peppered with tiny blue dots. This indicates two things: He suppressed the expected shot activity of his nightly assignments and reduced their shot efficiency,” Goldsberry said.

“Those tiny hexagons all over the court mean that players rarely shot when Paul was the on-ball defender. The fact that they’re tiny blue hexagons means that when they did shoot, they were really ineffective. Results from the Franks-Miller study reveal that among all perimeter defenders, Paul’s matchups exhibited some of the biggest decreases in both shot frequency and shot efficiency.”

In real numbers, Paul only allowed 11 points per 100 possessions despite guarding some of the best players in the league, such as Damian Lillard, Stephen Curry, and Russell Westbrook. Paul’s matchups ended up shooting about 80 percent as much as expected.

In comparison, the Defensive Shot Chart for James Harden is full of big hexagons, indicating that opponents would shoot more than usual against him—or about 114 percent as much as expected.

The colors also illustrate how opponents would shoot better than normal against him in most areas, except some spots in and around the paint. Those shots may have been impacted by Harden’s teammate Howard.

The presentation includes Defensive Shot Charts for another great defender and a below-average defender.

Kawhi Leonard has earned a reputation for being a shut-down defender. His Defensive Shot Chart bears that out, illustrating how opponents shot very few 3-pointers against him and just displayed average shot efficiency when Leonard was the assigned defender last season. In fact, Leonard ranks No. 1 in defensive impact on shot efficiency and frequency, the analysts said in their report.

Deron Williams, like Harden, played pretty bad defense last season. His opponents took more 3-pointers against him than usual and shot around average or slightly above average. He actually had the second-least impact on opponents shooting three-pointers from the center of the court, just ahead of new teammate Jarrett Jack.

The results for big men are mostly in line with their reputations.

Hibbert, the Pacers center, has long been known to be a defensive force. The new data analysis, which focuses on possessions lasting at least five seconds in which all players are in the half-court, shows that Hibbert contests the shot of 41.9 percent studied possessions.

Hibbert’s defensive prowess is proven by his being the most impactful player in the league in terms of reducing shooters’ shot efficiency in the restricted area.

“Whereas one defender may be good at discouraging shot attempts, the other may be better at challenging shots once a shooter decides to take it,” the authors wrote in their report.

“This demonstrates that skilled defenders may impact the game in different ways, as a result of team defensive strategy and individual skill.”

“The NBA is experiencing a boom in popularity, and millions of fans are obsessed with learning about the game and studying everything there is to know about their favorite players,” Goldsberry concluded.

“Unfortunately, even if you examine all of the stats, it’s hard to appreciate greatness on both ends of the floor; hopefully this new research will start to change that.”