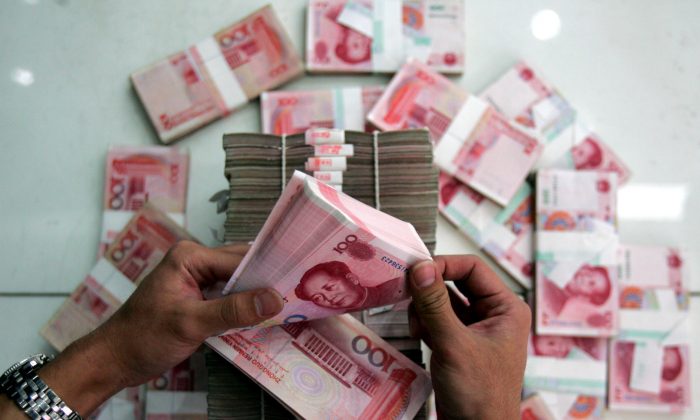 A clerk counts stacks of Chinese yuan at a bank in Beijing, China, on July 22, 2005. (China Photos/Getty Images)
Business & Economy

Chinese Yuan Global Now No. 4 but Far From No. 1

China has been the world’s second largest economy for some time, ahead of Japan. Now it has also managed to overtake the yen as the No. 4 currency used in global payments, according to banking systems provider SWIFT.

This has brought back the crowd of people claiming that the yuan would one day become the world’s reserve currency.

“This is the mooted decline of the U.S. dollar’s premier reserve status as the yuan becomes a reserve currency, which is one that is widely held by governments and institutions among their foreign-exchange reserves because it is seen as a store of value,” Fidelity’s Michael Collins wrote in June 2014.

Let’s take a step back to see if overtaking the yen makes much of a difference.

To put things in perspective, we can see that the yuan is now ahead of the yen by a mere 0.03 percent—at a grand total of 2.79 percent of all payments on the SWIFT system compared to the yen at 2.76.

How SWIFT can call this a “stellar ascension” is unclear. To be fair, the yuan’s use gained 1.4 percent to almost double. What most people fail to mention is that the dollar added 6.07 percentage points to 44.82 percent of all global payments.

The British pound and the euro are far ahead of the yuan as well, and this situation won’t change much until China completely liberalizes its capital account and reforms its financial system.

Until then, China may have a financial crisis to deal with, which could further dampen the use of the currency to be commensurate with the size of its economy and its status as the world’s largest trading nation.

Regardless, there are other criteria that the yuan needs to fulfill to become a reserve currency, and it’s far away from checking those boxes too.

“To be a reserve currency means that countries that have reserves have to invest it in something, so you need a deep liquid pool of investable assets. China does not have that. There is no Chinese bond market … and it would take 10 to 15 years to develop one,” says Jim Rickards, author of “Currency Wars” and “The Death of Money.”

Even the IMF poured cold water over China’s ambition to become part of its reserve currency, the Special Drawing Rights system (SDR), when it delayed a possible inclusion until September 2016, rather than January, as is customary.