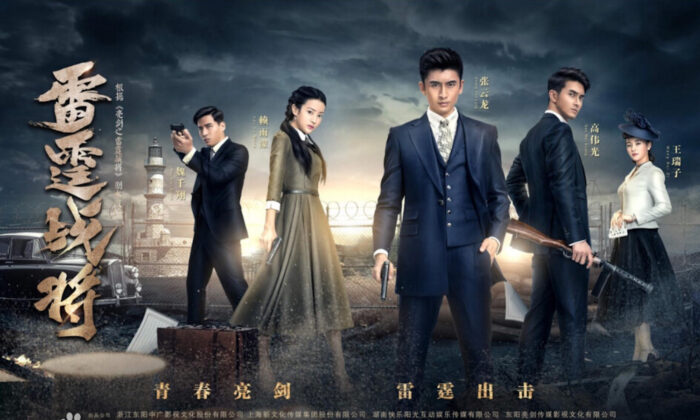 An anti-Japanese World War II television series that just started airing this month in mainland China has been flooded with negative audience reviews. A day after state-run media People’s Daily published an article on Nov. 15 criticizing the show, it was suspended and removed from online streaming platforms in China.

The “Thunder Warriors” was specially released to celebrate this year’s 75th anniversary of the end of World War II. During the conflict, Chinese forces fought off Japan’s invasion.

Despite communist troops’ limited participation, the Chinese Communist Party (CCP) credits itself as a key player in China’s victory. The Party calls the conflict “War of Resistance Against Japanese Aggression and the World Anti-fascist War.” Before the series was suspended on Nov. 16, it aired nine out of the 39 episodes on Hunan Satellite TV, a major Chinese TV network.

Ironically, the day before the show’s suspension, the Chinese military’s official newspaper, the People’s Liberation Army Daily praised the show as “a fine war drama that sang the main theme of the times.” The article was removed on Nov. 16, but major Chinese media outlets reposted it.

The “War of Resistance Against Japanese Aggression,” more commonly known as the second Sino-Japanese War, took place from 1937 to 1945. The Kuomintang, or Nationalist Party, troops mainly fought the Japanese with assistance from the United States. The Chinese communist troops went into hiding during the war, while taking the opportunity to attack Kuomintang troops and expand communist-controlled territory. After the communists took over China in 1949 under Mao Zedong, it claimed to be the victor that fought against the Japanese invasion. Today, the CCP uses the war to invoke anti-Japanese and nationalistic sentiment.

“Thunder Warriors” was widely criticized by Chinese netizens for its total disregard of historical accuracy. The Chinese communist troops, called the Eighth Route Army during World War II, was poorly equipped and struggled with harsh conditions in rural and remote areas. However, in the TV series, the main characters were portrayed by young “idol drama” actors who “smoked cigars, drank coffee, lived in villas, and fought with advanced automatic rifles,” according to Chinese media. “Idol dramas” refer to romance-themed soap operas that usually feature young popular celebrities and are catered to viewers in their teens to early 20s.

People’s Daily published a review article on the afternoon of Nov. 15, criticizing “Thunder Warriors” for using “idol drama” plotlines on a show with anti-Japanese themes. It pointed out that the drama’s stereotypical characters, over the-top-performances, and lack of historical accuracy were criticized by netizens. “This series is another typical hard-to-believe anti-Japanese war fantasy. The only difference is that it put on a coat of ‘idol drama,’” the report said.

The day after the People’s Daily published its review, “Thunder Warriors” was pulled from Hunan Satellite TV, which announced that it would suspend the show and replace it with another series during that time slot. Many mainland netizens wanted to hold China’s media regulator, the State Administration of Radio, Film and Television, accountable for allowing the series to air.

Based on information on mainland Chinese websites, netizens discovered on Nov. 16 that “Thunder Warriors” was completely removed from online streaming services such as iQiyi, Tencent, and Mango.