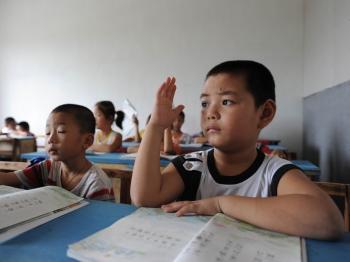 A group of Chinese elementary school teachers has recently decried the textbooks used for teaching children in China as poor quality, bland, and false.

In a recent book they published on the subject titled Save Our Children: A Critique of Elementary School Language Textbooks, they argue that “our children are still being fed poison” in the Chinese mainland education system.

The authors are Chinese elementary school language teachers and founders of the “Frontline Educational Research Group.”

The book delineates the “poisons” and “four major drawbacks” in the most widely used elementary school textbooks. These are published by People’s Education Press, Jiangsu Education Publishing House, and Beijing Normal University Publishing, the three major publishing companies that together make up 80 percent of China’s textbook market.

The authors complain that the compilers of textbooks in China have, for one reason or another, chosen bland works that fail to capture China’s classical culture.

The teachers refer to Italo Calvino (1923-1985), an Italian writer and novelist, who once wrote: “The classics are books that exert a peculiar influence, both when they refuse to be eradicated from the mind and when they conceal themselves in the folds of memory, camouflaging themselves as the collective or individual unconscious.”

“There are a multitude of excellent children’s classics in the world, and the question needs to be asked, why on earth did the compilers of mainland Chinese language textbooks choose subpar works?” the teachers quiz.

Lack of a Child’s Perspective

The teachers argue that most language textbooks focus on lecturing and fail to appeal to children. “Some of the material seems dry even to grownups; how can they expect children to enjoy it?” the teachers entreat.

In a chapter titled “The Little Lion,” a little lion obeys his mother and strives to learn to run and catch prey. These teachers say that the basic concept of the story is that one learns by bearing hardship, but they ask whether working hard is equivalent to bearing hardship—“why can’t we tell children that learning can be fun too?” they ask.

Another text reads, “Mother Lark wiped her sweaty forehead,” despite the fact that birds do not have sweat glands.