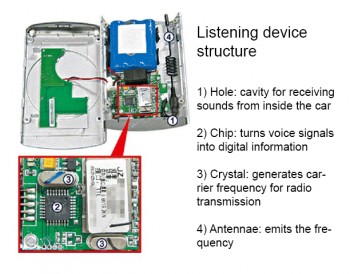 The listening device as photographed and documented by Apple Daily, a Hong Kong newspaper. (Explanatory slide by The Epoch Times)
China

For years now, Chinese authorities have been installing spying devices on all dual-plate Chinese-Hong Kong vehicles, enabling a vast network of eavesdropping across the archipelago, according to a Hong Kong newspaper.

The report in Apple Daily states that the recording devices began being installed as “inspection and quarantine cards” in July 2007. They were installed without charge by the Shenzhen Inspection and Quarantine Bureau on thousands of vehicles.

Smugglers were the first to note something strange about the devices. A source told Apple Daily that, after the cards were installed, mainland authorities had no trouble picking off the cars carrying illicit goods.

“For every ten cars we ran we only had [smuggled goods] in three or four to reduce the risk, but the border agents caught all of them. The accuracy was unreal!” Apple Daily quoted the smuggler saying.

The device, no larger than a PDA, is taped onto the vehicle’s front window. Protective tape covers the screws, presumably to prevent tampering—though it didn’t stop Apple Daily from removing the devices, taking them to experts for inspection, and presenting pictures of them splayed open on their website, with neat graphics indicating the various internal components.

Apple Daily says they took the device to a university professor and a private investigator, both of whom attested to the espionage potential of the units.

Zhang Dawei, identified as “a private investigator of over 30 years,” took a look at the device’s internal structure and told the Daily that the card could certainly be used for eavesdropping.

An Associate Professor of Electrical Engineering at City University of Hong Kong, Zheng Liming, took apart one of the devices and confirmed that it can listen in on conversations.

And the range is extensive, he said. “The signal receiving range is up to 20km, which means if the device installer wants to, they can listen even when the vehicles are in Hong Kong,” he said.

Two of the regions in Hong Kong where the device can transmit data back to China are Sha tin and Tuen mun.

He thus thought it “very likely” that they were being used for surveillance.

The Daily interviewed several Hong Kong drivers to gauge their reactions; predictably, they were often irate.

Ms. Deng, who operates a real estate business, said: “Even if we hired a maid, we are not allowed to install a surveillance camera in her room due to privacy issues! You can’t just do whatever you want.”

A senior manager in an unidentified company noted that those who qualify for the dual license plate usually have some financial clout. If their business conversations in the car were recorded and the information shared, he said, it may be enough to send people bankrupt.

HKBusiness.net, an online news site, says that businesses that invested more than $1 million in mainland China and paid more than 30,000 yuan in tax over the past year qualify for a dual license plate.

Apple Daily quotes a source saying there are at least 20,000 cars with dual license plates, and tens of thousands of trucks and buses.

A reporter from the newspaper went to the Shenzhen Inspection and Quarantine Bureau and confronted them with the accusations. Staff on duty flatly denied the idea, Apple Daily said. Speaking Cantonese, they assured him that “It’s not that high tech.”