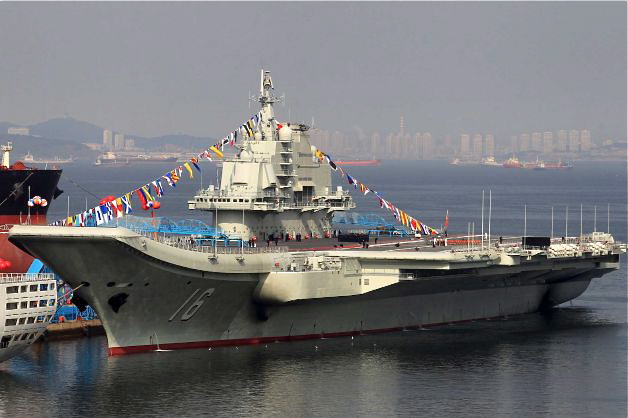 In a heated dispute between China and Japan over the uninhabited Senkaku Islands, China officially put its first aircraft carrier into service Tuesday, according to China’s Defense Ministry.

Aircraft carriers in full operation can be used to carry out medium-to-long distance maritime activities, and project force on remote locations.

The development of this new weapon by China is of particular interest given China’s several conflicts with other East Asian nations in the South China Sea—the current flash point over the Senkaku Islands is only one of several territorial disputes.

The deployment of aircraft carriers is a prerequisite for a leading Asian naval power according to Li Jie, a China Navy Military Academy researcher.

China’s Minister of Defense, Liang Guanglie, reportedly told his Japanese counterpart in 2009 that “China would not be without an aircraft carrier forever.”

The aircraft carrier is 300 meters (990 feet) long and refitted from a former Soviet vessel Varyag, bought from the Ukraine in 1998, according to a report by The Associated Press (AP).

The Varyag has been tested in the Yellow and Bohai seas since last August, according to Shanghai Daily. The report also quoted Li Jie as saying that the aircraft carrier would play an important role in China’s dealing with island disputes and defending its national interests.

Furthermore, the Shanghai Daily report claims that the ship shall soon be accompanied by destroyers and frigates to construct an aircraft carrier fleet.

“There are a whole range of engineering and operational tasks the Chinese need to work through before they have an aircraft they can reliably operate from a carrier,” said Carlo Kopp, as quoted by Reuters. Kopp has studied China’s aircraft carrier aviation program as part of his work for an independent military think tank.

“Even when the Varyag is operational, it will only have a limited operational role, mostly for training and evaluation ahead of the anticipated launch of China’s first domestically built carriers after 2015, military analysts say,” according to the Reuters report.