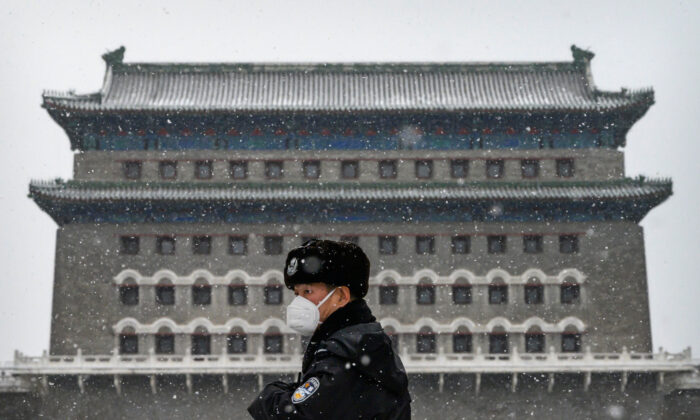 A Chinese police officer wears a protective mask as he stands guard outside the Qianmen Gate during a snowfall in an empty and shuttered commercial street in Beijing, China, on Feb. 5, 2020. (Kevin Frayer/Getty Images)
By Eva Fu

A former TV-anchor-turned-citizen-journalist was arrested in the central Chinese city of Wuhan on Feb. 26, the latest target in the Chinese regime’s crackdown on free speech amid the novel coronavirus outbreak.

Li Zehua, 25, was formerly with China’s state broadcaster CCTV. He caught a train to Wuhan about two weeks ago, saying that he has to use his own “eyes and ears” to get a full picture of the outbreak.

Over the following days, he visited places such as the Baibuting community, where a banquet attended by more than 40,000 families led to community-wide infections; a funeral home; and a local train station where he talked to a stranded migrant worker.

On Feb. 26 night, hours after he visited the area around a state-owned virology lab, several police officers showed up at his hotel.

Li started live-streaming after police knocked on his door. In the video, he appeared frustrated, saying he did nothing wrong. He also said it was a “very surreal” moment.

“Before, when I turned on the camera to speak, it was always for other people. Today, I’m finally speaking for myself,” he said. “Although this might be my final speech.

Eventually, he let the police in.

“I feel that it’s unlikely that I will not be taken away and quarantined. But I want to make this clear: I am not ashamed to face myself, nor my parents … my media concentration [in college], and this country,” he said shortly before police cut off the live-streaming signal.

Li is the third citizen journalist to be arrested for reporting unfiltered information from Wuhan.

On Feb. 10, two days before Li settled into Wuhan, police broke into the home of local resident Fang Bin, who posted a viral video showing eight dead bodies inside a van that was parked near a major hospital.

That same week, Chen Qiushi, a video blogger who traveled from Beijing to Wuhan in late January, disappeared from public view.

“It shows the government’s zero-tolerance of people exposing the truth, not even ordinary citizens and people who [have] worked for the government,” he told The Epoch Times in an email.

An internal government document recently obtained by The Epoch Times shows that Hubei Province alone has deployed more than 1,600 internet trolls to regulate internet speech related to the outbreak as well as eliminate negative remarks.

A man surnamed Tu in Guangdong province was recently detained for 15 days for making “derogatory remarks” about China’s leading outbreak control expert Zhong Nanshan and the Chinese regime. The prosecutors in Zhongshan city, where Tu lives, deemed the remarks a violation of the law. Tu later posted a handwritten public apology, and marked his fingerprint on the document.

Legal scholar and civil rights activist Xu Zhiyong was arrested in Guangdong in mid-February, days after he wrote a scathing public letter urging Chinese leader Xi Jinping to step down for his “inability to handle crises,” including the coronavirus outbreak.

Huang Yang, an outspoken activist from the city of Chongqing, was summoned by the police four times over the past three weeks for spreading information critical of the regime on WeChat, a popular Chinese social media platform.

In a screenshot he provided to The Epoch Times, showing a Feb. 14 WeChat conversation that implicated him, Huang made a reference to whistleblower doctor Li Wenliang, one of eight medical professionals to receive a police warning for sounding the alarm about the dangerous virus. Li later died after contracting the virus from a patient he treated.

Huang said his tragic death demonstrates the authorities’ propaganda that survival is more important than important human rights is a lie.

“Citizen’s freedom of speech is in every way inseparable to their rights for survival,” he wrote in the message. Huang was interrogated by police the next day.

Hu Jia, a Beijing-based activist and a prominent critic of the Chinese Communist Party (CCP), said he has been under house arrest since Jan. 15 for his advocacy related to the outbreak and human rights lawyers who were detained during China’s year-end crackdown in 2019.

Police visited his ailing parents in their 80s several times in recent weeks, to put pressure on Hu. In one encounter, the officers told Hu plainly to keep quiet or see his family “ruined.”

Hu watched Li’s video after he learned about his arrest, and was impressed by the millennial’s courage to confront the regime.

“He [Li] wanted to dig out the truth at the frontline of life and death … to record history in motion,” Hu told The Epoch Times.

The CCP is “using police, the security system, and the prisons to wage an asymmetric war to suppress citizens’ political rights,” he said. “They chain up anyone who tries to speak the truth … and throw them into prison—this is their typical tactic.”

In Li’s video, moments before he let the police into his hotel, he spoke to the camera and likened himself to the main character in The Truman Show, a 1998 American science fiction film. The protagonist, Truman, lives his entire life in a simulated reality TV show until he decides to make an escape.

“I think everyone is like Truman … when you discover that [exit] door and go past it, you will never turn back,” he said.