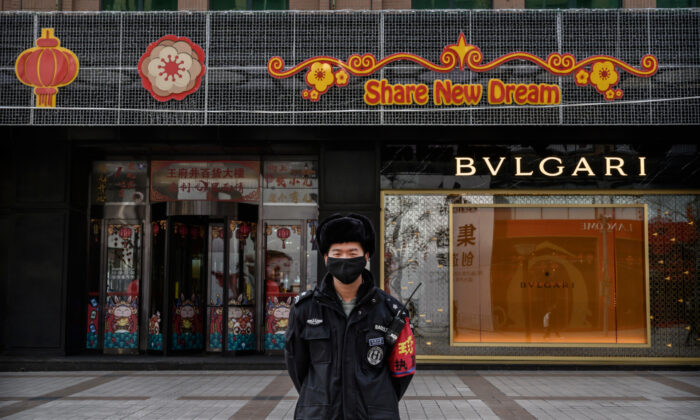 A Chinese security guard wears a protective mask as he stands on a commercial street in Beijing, China, on Feb. 18, 2020. (Kevin Frayer/Getty Images)
By Cathy He

Cathy He
CHINA EDITOR
Cathy He is a New York-based editor focusing on U.S. China-related topics. She previously worked as a government lawyer in Australia. She joined The Epoch Times in February 2018. Contact Cathy at cathy.he@epochtimes.com.
View profile
and Eva Fu

The propaganda department in virus-stricken Hubei Province has engaged over 1,600 censors to scrub the internet of “sensitive” information relating to the coronavirus outbreak, according to an internal document obtained by The Epoch Times.

The internal report, dated Feb. 15, detailed the agency’s efforts to ramp up censorship measures. It was drafted after a speech given by Chinese leader Xi Jinping via video link on Feb. 10 to “frontline responders” of the coronavirus outbreak in Wuhan, the capital of Hubei, where the virus first broke out.

The revelations come as the Chinese regime tightens information controls over the worsening outbreak, as netizens have increasingly turned to the internet to vent their frustrations about the authorities’ response, or document what is happening on the ground.

The illness has seen a steadily growing official list of infections and deaths on a daily basis. Experts and commentators, however, believe the actual number of infections to be far greater, due to underreporting and shortages in testing kits and hospital beds—meaning many people are left undiagnosed.

According to the document, the department has hired more than 1,600 trolls, known as the 50-cent army in China, to regulate internet speech continuously, 24/7.

The trolls, through technological and manual screening, had identified as many as 606,800 posts online with “sensitive or harmful information,” it said.

Their approach, it said, was to “timely dispel the online rumors” and “strike powerful blows offline.”

As of Feb. 14, the online censors had deleted as many as 54,000 such “rumors,” and had social media influencers write nearly 400 commentary articles to shape the narrative.

The regime’s propaganda efforts, the report said, should be directed toward promoting the effects of officials’ outbreak control measures and the “moving deeds” of volunteers, community workers, and the police.

Some professional “internet commentators” had also made 400,000 comments to “counter the negative public opinions,” according to the document.

Posts mourning whistleblower doctor Li Wenliang, who died of the virus he was warning about in December, quickly disappeared from the internet in the hours after the news of his passing was first announced. “I want free speech,” a phrase that became trending on Chinese social media following his death, was also swiftly erased.

As of Feb. 11, over 2,500 people had signed a joint online petition expressing anger over Li’s death and criticizing the government for suppressing free speech during the outbreak. Several co-signees were subsequently summoned by local police. At least one was detained.

The department has also set up 11 work groups for the purpose of “wartime propaganda” work. The groups were communicating daily with propaganda officials from the central government to “coordinate public opinion” in real time on issues “online and offline,” “inside the country and overseas,” it stated.

According to the leaked report, at least 60 reporters from 33 overseas news agencies came to Wuhan after the coronavirus outbreak began earlier this year. However, at least 47 of them agreed to leave, through the department’s “communication and persuasion.”

As of the evening of Feb. 14, only five non-mainland outlets had reporters in Hubei.

Meanwhile, the propaganda department as of Feb. 4 has sent over 300 state-run media reporters to Hubei to promote positive media coverage.

To “lead overseas media to objectively report on the outbreak information,” the department has set up an international language section and have published 200 pieces on the outbreak from official channels in seven languages, the document said.

On Jan. 14, a group of reporters from at least four Hong Kong media were taken to a police station located within a hospital in Wuhan after trying to interview patients, according to local media.

The police searched their belongings and asked them to delete the videos taken around the hospital. They were only released after 1 1/2 hours of interrogation.

The Chinese regime has made the suppression of information about the virus a priority.

This has filtered down to local authorities cracking down on people for “spreading rumors” on the internet about the outbreak.

Chinese state-run media have warned people not to “spread fake information” about the coronavirus, lest they be in violation of China’s Criminal Law.

A provision of that law states that anyone found fabricating and spreading false information on an epidemic, disaster, or police activity, can be sentenced to three to seven years in prison.

Washington-based nonprofit Chinese Human Rights Defenders documented 254 cases of arrests between Jan. 22 and Jan. 28, in which Chinese citizens were punished for “spreading rumors” relating to the virus. The forms of penalty included fines, verbal warnings, and forced confessions.

In a list of 167 cases of people punished for rumor-mongering published by U.S.-based website China Digital Times, the majority of the “offenses” were posts about confirmed or suspected cases in their city or neighborhood. Some included the number of deaths.

For instance, a man in Baoding City, Hebei Province, wrote on his blog: “I truly believe the authorities have not revealed the true number of infected patients. I heard that in a village about 20 kilometers [12.4 miles] from ours, the number of confirmed cases was six on Jan. 26. All were sent to the hospital for quarantine. But I have not seen any official reports that included these six cases.”

Olivia Li contributed to this report.