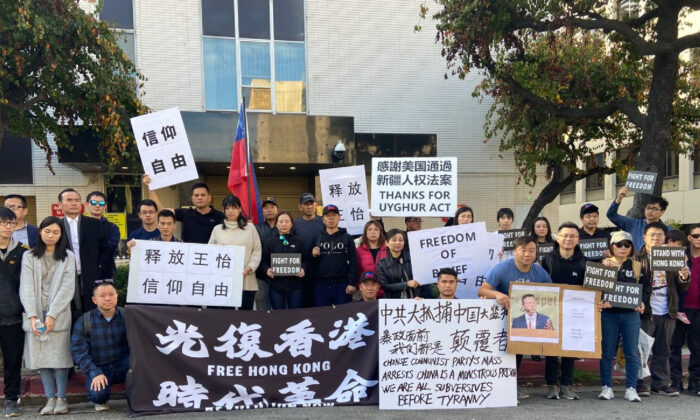 Pro-democracy activists gathered in front of the Chinese Consulate for a protest in Los Angeles, Calif., on Jan. 1, 2019. (Courtesy of Zheng Cunzhu)
China Human Rights

Dozens of pro-democracy demonstrators stood in front of the Chinese consulate in Los Angeles on New Year’s Day to take a stance against Beijing’s year-end arrests of human rights advocates.

Raising signs reading “fight for freedom,” and “freedom of belief,” the protesters voiced concerns about dissidents in the mainland.

Over a dozen Chinese lawyers and activists were reported missing or arrested in the last days of 2019, in a fashion reminiscent of the nationwide arrests of hundreds of rights advocates in 2015, which later became known as the 709 incident.

Even for those who are fortunate enough to escape overseas, authorities have taken their families as hostages to pressure for their return, protester Wang Liyun, a Chinese rights activist who fled to the United States in 2013, told the Chinese-language edition of The Epoch Times.

In the week leading up to the New Year, reports emerged of a string of house raids, home visits, arrests, and sudden disappearances in at least six provinces across China.

On the night of Dec. 26, more than 10 police officers turned up unannounced at the home of activist Dai Zhenya in the southern Chinese province of Fujian and took him away, Dai’s wife Lin Yanping told the Chinese-language edition of The Epoch Times.

According to Lin, the police claimed the case was “serious” and involved “subverting state power”—a common charge against Chinese dissidents—but did not present any legal documents or warrants. The arrest occurred when Dai opened his door to check on an abrupt power outage, allegedly caused by the police.

Lin said the police also seized his computer and books, and told her that she should “prepare more clothes” for Dai as they will transfer him to the eastern province of Shandong, where the weather is cold. Dai, who works as an accountant, had experienced multiple arrests for his advocacy, she added.

CHRD noted that all of those arrested had participated in a secret three-day gathering in Fujian earlier in December, which was attended by over 20 rights lawyers and activists.

Patrick Poon, a China researcher at Amnesty International, told The Epoch Times that sources revealed that the attendees “discussed the prospect of democracy in China.”

“It shows again that the Chinese government doesn’t even allow such minimal level of private discussion on such issues,” Poon told The Epoch Times. “There is simply no freedom of expression in China,” he added.

On Dec. 29, police also summoned five people in the city of Hangzhou in east China’s Zhejiang Province, for questioning. The five had previously had dinner with someone who went to the Fujian gathering.

Wei Xiaobing, a 42-year-old businessman, has been unreachable since Dec. 30 night, after he messaged his friend that someone was violently pounding on his door, according to Civil Rights and Livelihood Watch, a Chinese website focused on news about Chinese dissidents. Police had detained Wei briefly on Dec. 24 for distributing T-shirts with words expressing support for the ongoing Hong Kong protests.

Two other lawyers had narrowly missed police visits to their homes, and four others remained incommunicado, according to CHRD.

On Jan. 1, China formally implemented a new encryption law that would criminalize any use of data encryption for “activities endangering national security, social public welfare, and legal rights of others.”

Poon said that it would be “very easy” for Chinese authorities to use this law against activists due to the vagueness of its terms.

“The authorities can easily accuse activists of engaging in activities that could be considered ‘endangering national security’ by simply taking part in discussion[s] on democracy and human rights as we have seen in many cases,” he said.

“The human rights situation is very gloomy as the government is stepping [up] more and more restrictive measures on curbing freedom of expression.”

On Christmas eve, activist Huang Qi, who founded the website “64 Tianwang” to document the government’s corruption and human rights abuses, was sent to a prison in southwest China’s Sichuan Province to serve a 12-year sentence.

On Dec. 30, Chinese authorities sentenced Sichuan-based pastor Wang Yi to nine years in prison after a secret trial on charges of “inciting subversion of state power.” Poon said at the time that the verdict “makes a mockery of China’s supposed religious freedoms.”

At the Chinese Consulate-General in Los Angeles, protester Wang, who held a placard reading “in the face of tyranny, we are all subvertors,” in reference to the commonly-used charges deployed by the regime against its critics, explained the meaning behind its message.

“But the stance that we want to express today is, we have to ‘subvert’ such a tyrannical power. It’s not to subvert the country, but the brutal Chinese regime,” she said.