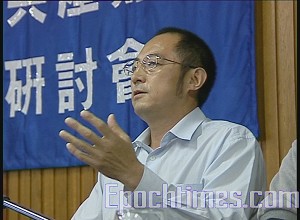 MELBOURNE—On May 2, Yuan Hongbing, the renowned Chinese liberal jurist now living in Australia, accepted an interview with The Epoch Times to talk about the recent case in which six attorneys broke the mandate by the Chinese Communist Party (CCP) and openly defended in court, Wang Bo's family—a family of Falun Gong practitioners. When the persecution against Falun Gong began almost eight years ago, it also became unlawful for public defenders to represent Falun Gong practitioners.

Yuan Hongbing pointed out that the CCP will certainly be prosecuted in the near future. It must be charged with the inhumane crime of persecuting Falun Gong. The international society should urge the CCP to stop this persecution before the 2008 Olympics.

“The CCP has no right to prosecute Falun Gong practitioners.” Yuan said, “The six attorneys broke restrictions imposed by the barbaric CCP. This indeed is a brave act and deserves respect.”

In the meantime, Amnesty International pointed out on April 20 that under the rule of the CCP, the human rights and suppression situation continues to worsen. For the upcoming Beijing Olympic Games, the CCP has been forcefully appropriating land, and arresting or harassing protestors. This raises concern that the Olympics have turned into a tool for the CCP to suppress dissidents. Yuan thinks if the day comes when China is hosting the Olympic games and the persecution of Falun Gong is still on going, then it will be a shame for all mankind.”

Yuan said, “The whole world with conscience is approaching an important landmark in history: by all means, we must force the barbaric CCP to end the massive political persecution of Falun Gong prior to the 2008 Olympic Games.”

Yuan emphasized that in the near future, the Chinese people will bring the CCP to open trial for justice under the charges of crimes against humanity for its persecution of Falun Gong.

On April 27, the six attorneys from Beijing appeared in Shijiazhuang Middle Court to defend Wang Bo's family, three Falun Gong practitioners. The court is scheduled to send out its decisions from the trial within 30 days.