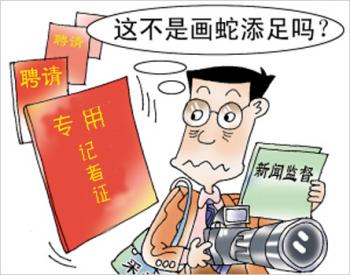 A cartoon attempting to explain the regulations. The red book to the left says 'special journalist license,' while the anxious journalist holds papers saying 'news supervision.' The text above uses a Chinese idiom to say 'Isn't it adding something superfluous?' (China.com.cn)
China

Chinese Officials Try New Press Restrictions, Then Back Off

By Matthew Robertson and Weiguo Gong
Print
Propaganda officials in southern China were forced to limit the scope of an order requiring journalists to apply for a “special journalist license” before interviews after receiving a flood of complaints online.

The order, titled “Dongguan City Promotes Care and Support for Media; Builds Idea for Positive Environment for Public Opinion,” a summary of which was published in the Guangzhou Daily on Oct. 22, argued that officials from the city’s Propaganda Department were attempting to help journalists by giving them an official certificate so they could do their job unimpeded.

The directive was questioned by bloggers, who wondered why Dongguan City should need the measure, since journalist licenses are already regulated by the General Administration of Press and Publication (GAPP), which works closely with the Central Propaganda Department in Beijing.

Some pointed out that in recent years, local regime officials have purposefully set up obstacles for media reporting for fear of having corruption, administrative failures, or popular discontent exposed.

Under the new order, bloggers argued, local officials could stall requests or arbitrarily reject applications. Organizations like the Foreign Correspondents Club of China have documented harassment of journalists in China, where provincial officials send plainclothes thugs to beat journalists or use police to pursue reporters, confiscating and destroying their photographs and video recordings.

The order contains several clauses near the end which outline the conditions of the license. It says that journalists who don’t “follow interview procedures” or who breach security cordons “will be pursued especially seriously according to the law.” It also said that those who don’t “report truthfully” may have their certification rescinded.

In response to the criticism, the Dongguan Propaganda Department on Oct. 25 published an update that the “special journalist license” will be used only for large-scale official conferences.

Before that date, on Oct. 23, officials set up a Web site with simple cartoons and slogans attempting to explain the issue.

The Chinese Communist Party’s control of media in China has been widely documented by scholars,  journalists, and NGOs; propaganda and control of public opinion in China’s current era is thought to be integral to maintaining one-party rule in the country.