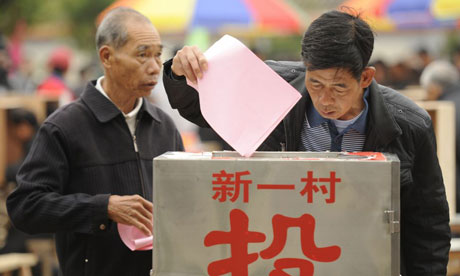 Residents vote in Wukan during the election they were promised after rising up against village authorities. (AFP/Getty)
China

Contradictory statements by officials at China’s annual two meetings regarding the eagerly anticipated village elections in Wukan, Guangdong Province, do not bode well for the future of such elections across China or for Wukan village.

Wukan election results were disclosed by the village committee on March 4, during Beijing’s annual legislative session, known as the two meetings. The election outcome has been a hot topic among reporters at the two meetings, who want to get the latest official take. As was predictable, two officials downplayed the elections, one telling media that such elections are nothing new, the other said, they were not suitable on a national scale.

According to a mainland media report, when questioned during a March 4 press conference, before the national congress, Li Zhaoxing, the spokesperson at the two meetings, said the Wukan elections are not suitable on a national scale as there are too many people in China. “The economic development is uneven and transportation is not developed in some places, so direct election will be difficult.”

While Li made it sound as if logistics are the stumbling block for free nationwide elections in China, Wang Yang, the Chinese Communist Party (CCP) secretary of Guangdong Province, had a different slant.

Meanwhile in Wukan, Lin Zuluan, originally appointed village party secretary, was elected village director. The newly elected village committee’s next task is the retrieval of the village land secretly sold off by the last village chief.

Wukan villagers’ bravery in standing up to communist officials’ abuse and corruption has gained them widespread admiration in China and international attention. But at present, the village committee’s degree of autonomy is uncertain.

Signs of retaliation are surfacing. The daughters of Xue Jinbo, the village representative who had died in police custody last year, are said to suffer various sorts of discrimination as retaliation for their persistent outspokenness and demand for the release of their father’s body.

One of the daughters, a teacher, was fired from her job and forced to withdraw from the elections. The other daughter tried to register at a school, on Feb. 28, but was turned away, according to an Oriental Daily report on March 1.

Xia Ming, a professor of Political Science at New York City University and a China affairs expert, told The Epoch Times one can’t have too much hope in what some are calling the “advance in Wukan.” When the citizens can’t stand the local leadership anymore, the CCP will use a temporary conciliatory policy to allow the crisis to die down, then take revenge later, he said.

Responding to the officials’ comments at the two meetings, Xie said: “It’s true, there was no breakthrough. The Wukan elections were held under the village organization law. Under Chinese law, the village level is self-organized by the citizens,” he said.

According to Xia the Wukan elections revealed many problems with the Chinese regime’s claims of democratic expansion within the framework of the law.

As to whether the villagers will be able to get their land back, is also uncertain.

Guo Weiqing, Professor of Political and Public Management at Guangzhou’s Sun Yat-sen University said, land issues may involve national policy that are outside of village, city, or provincial jurisdiction. “This will bring new challenges to the village committee,” he said.

Beijing is intensely concerned with “social stability maintenance” leading up to the 18th Party Congress in October. To prevent “incidents,” tens of thousands of troops are already mobilized in Xinjiang and Tibet. Also, about 15,000 cadres in Hebei Province—where Beijing is located—were ordered to live in over 5,000 villages for the next eight months to make sure there will be no large-scale uprisings before the 18th Party Congress.