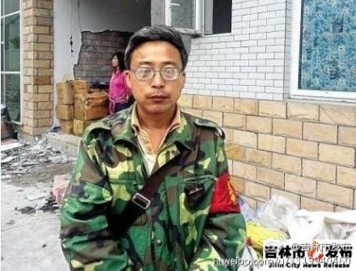 Yang Chengyi, deputy chief of Qingyuan township, was dismissed fired for being absent from the relief work site due to being too busy helping quake victims in a remote area. (Weibo.com)
China

The Chinese public expressed sympathy toward a Sichuan cadre, who was fired Wednesday, because he was busy helping people in another area.

Yang Chengyi, deputy chief of Qingyuan township, was dismissed from his position for being absent from the relief work site in Hengxi Village.

However, villagers and co-workers spoke out in Yang’s defense, saying he had been distributing relief items in remote places when the disciplinary inspectors happened to show up in Hengxi.

A rescue co-worker who wished to remain anonymous told the South China Morning Post that the inspectors couldn’t call Yang’s cell phone because the area had no reception.

“He has been wronged,” the co-worker added. “He is a very responsible official and an honest man.”

The magnitude-7.0 earthquake struck Lushan County on April 20, killing at least 196 people and injuring more than 11,000, according to official reports.

Despite losing his job, Yang went right back to work, assisting at the disaster site for long hours.

Internet users admired Yang’s attitude and wished for more officials like him.

“Yang is in charge of the rescue work at many places; he can’t be in several places at one time,” a netizen wrote on China’s Bulletin Board System (BBS). “A good supervisor should fully understand the situation before making a decision.”

A third said: “A good official is approved by his people, not by his supervisor.”