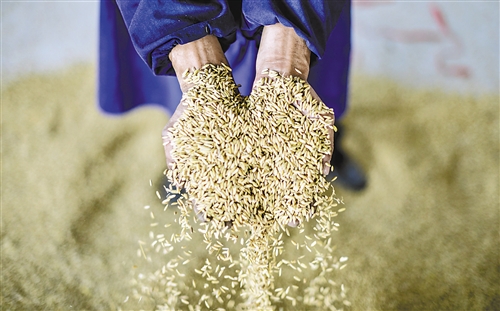 Among the promises being made by Chinese officials to foreign dignitaries as they prepare to visit Hangzhou for the G20 Summit in September, there are the usual suspects: safety, easy transport… and non-poisoned rice.

That’s according to Ren Zhengxiao, the chief of the State Administration of Grain, in an inspection of the “food supply base” for Hangzhou on July 27.

“We will not let a single grain of unsafe rice, or a drop of unsafe oil, get into the G20 summit meeting supply base,” he declared. This would safeguard food safety and display China’s strength under the international spotlight, to ensure success of the summit, as Chinese media put it.

But the message was hardly reassuring for Chinese citizens, who deal with the food safety problems that plague China on a daily basis.

It also comes at a time when the authorities are cracking down hard on businesses and churches to “create a safe environment” in Hangzhou before the summit, something that even local officials have complained about.

The question many Chinese had this time was: where will the contaminated rice go?

Some web users called Ren a “traitor,” co-opting a term that has traditionally been used by pro-regime nationalists to attack their enemies.

The stark contrast between the Communist Party’s great efforts to look after foreigners, while neglecting Chinese, is what inspired so much anger.

“It’s especially repulsive that the Chinese government is all about face-saving projects for outsiders to see,” a scholar in China told Radio Free Asia. “The outsiders can see the blue sky and enjoy safe food and water. If you can act that way for them, then why can’t you let the Chinese masses live a life like this?” the scholar, who insisted on remaining anonymous for fears about personal safety, told the broadcaster.

A housewife in Beijing told RFA that the remarks made her worry about what kind of rice she herself has been eating. “If they only take care of Hangzhou and ensure food safety for Hangzhou G20, then where will the unsafe rice go?”

On the same day the State Administration of Grain made the recent announcement, a high-end kindergarten in Harbin was found to have been feeding children moldy rice. Videos circulated online showing expired food in the kitchen, and piled bags of rice turning yellow and green with patches of mold.

The cook leapt from the window after being mobbed by furious parents, who finally understood why their children had been complaining of nose bleeds and stomach aches. The school has been temporarily shut down.

Rice for the G20 Summit will primarily come from Northeast China, where the fertile black soil ensures the rice is the highest quality in the nation. The rice will then go through multiple inspections for safety, officials say.

The exacting demands for the rice that will be fed to foreigners is a stark contrast to what the Chinese people are usually left to deal with, internet users have complained. This includes tainted milk powder, tainted buns, rice contaminated with plastic, and more. Chinese officials, on the other hand, are reported to have special food supplies including safe, organic farm produce and fresh water.

Hangzhou has been the center of renewed infrastructure development since being named the G20 Summit host, some of which locals complain has been extremely inconvenient, costly, intrusive, and unnecessary. Places of religious worship, including underground house churches, have been shut down, and rights activists have been detained or forced to leave the city for the duration of the meeting.