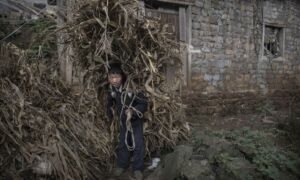 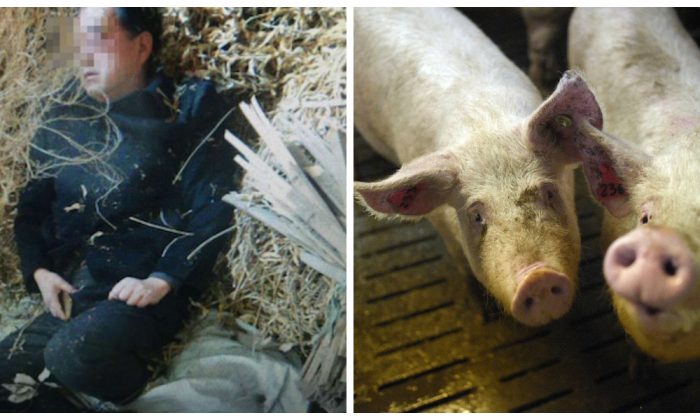 The suspected photograph of Tang asleep in a pig pen after the hit-and-run was widely circulated on the Chinese Internet. (Weibo.com)
China

A Chinese official who knocked down a pedestrian while under the influence was found hiding in a pig pen, according to reports widely circulated on the Chinese Internet.

The official, Tang Mouliang, got into an altercation with a road maintenance worker, known only as Chen, over who had right of way.

After the dispute, while Chen was calling local police, Tang slammed his car into Chen, dragging him for over 20 meters before driving off.

Tang was found hiding in a pigsty after the incident, according to Peng Pai, a Shanghai-based semi-official media outlet. A photograph, the source of which is unknown, shows Tang apparently asleep on a bail of hay.

Chen was admitted to hospital with severe flesh injuries, his medical bills costing 8,000 yuan (about $1,000), according to reports. Tang is reported to have only paid half of the cost.

“It is yet to be confirmed that he was drink driving, and he refused to take an alcohol test,” an official told Peng Pai.

Tang is vice chairman of the local Chinese People’s Political Consultative Conference for nearly a decade. The Conference is a Party-controlled advisory body that is mostly ornamental.

It is unclear whether more punishment is in the offing. The initial response from the Party seems comparatively soft, given the current political environment, in which a sweeping campaign has been launched against corrupt officials.

Guo Tailai, chief of the propaganda department of Yangzhong city, speculated in an interview with Yangtse Evening Post that the reason for Tang’s escape could be “concerns over his special identity, and suddenly doing something stupid.”

The news was reported by the Communist Party’s local disciplinary agency in the city of Yangzhong, in Jiangsu Province.