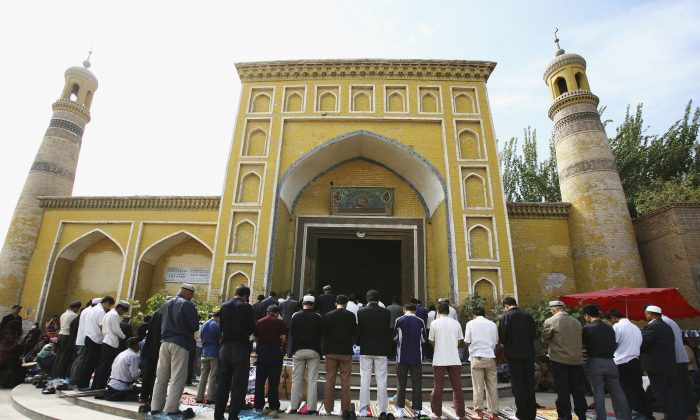 Muslims pray outside a mosque on September 22, 2006 in Kashi of Xinjiang Uygur Autonomous Region, northwest China. Kashi is an oasis city which has been noted in ancient times along the old silk road as a political and commercial centre. It is the hub of an important commercial district, bordering Russia, Afghanistan, Kazakhstan, Tajikistan, Kyrgyzstan and Uzbekistan with Pakistan to its south. The Islamic Uygur ethnic minority group constitutes the majority of its population. (China Photos/Getty Images)
China

A speech by a high level Chinese official that recognized contributions by approved religions to Communist society while blasting “religious extremism,” has been followed by a media scourge, particularly in Xinjiang, the western province that is home to China’s Uyghur muslims.

Chinese Communist Party’s (CCP) head of the State Administration of Religious Affairs, Wang Zuoan, wrote in Party-mouthpiece People’s Daily on Nov. 26 that approved religions should be encouraged, but then warned against “extremism.”

While some portions of the speech recognized contributions that religion has made, and called for greater integration of religions into Communist society, the official media emphasized the speech’s warnings against extremism. People’s Daily headlined their transcript of Wang’s speech, titled “State Bureau of Religious Affairs: be highly vigilant against religious extremist ideology.”

We must “actively prevent religious fanaticism, be on high alert for extreme religious ideology, and resolutely curb cult influence,” Wang cautioned, referring to those religions which are not officially approved in China: Tibetan Buddhism, Falun Gong, unregistered Christian churches, and the Uyghur’s practice of Islam.

“Forces” were furthering their “evil aims” by seeking to foist extremist beliefs on the region’s Muslims, said the state-run Xinjiang Daily three days after Wang’s speech, according to the Times of Oman.

“Religious extremist forces … don’t allow people to sing or dance, they incite them to disobey the government, to not use marriage certificates and I.D. cards. They prevent them from watching television, films, and listening to the teachings of patriotic religious leaders,” the paper reported.

Regime-mouthpiece Xinhua urged social workers to utilize their training to clearly understand the nature and dangers of religious extremism, and to take a firm, unequivocal stand against religious extremist ideology.

“Religious extremism in the political life of the contemporary world is a malignant tumor. The spread of religious extremism in Xinjiang is closely linked with ethnic separatism, and has created a series of violent terrorist crimes, bringing about serious harm to national security and social stability in the past decade,” said the financial paper Caijing, quoting a lecturer at the Autonomous Region Party Committee Party School.

“They endanger society, disrupt social stability, spread the seeds of hatred, and embark on a road of no return. We hate this foolish behavior, hate those evil souls,” the article continued. Caijing said that extremists exploit culture, costumes, and cultural issues to further their ends, according to the author.

Officials at Xinjiang Universities pledged at meetings to oppose religious extremism and separatism on campuses and emphasized the importance of political and ideological education, Xinjiang Daily reported Tuesday, according to New Zealand Week.

Speaking at a meeting to promote a CCP policy campaign among local educators and Party secretaries, university officials also said that students wearing religious clothing should be dealt with in a timely manner, said the paper.