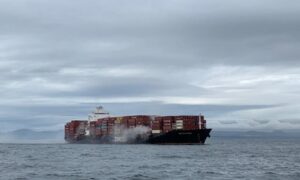 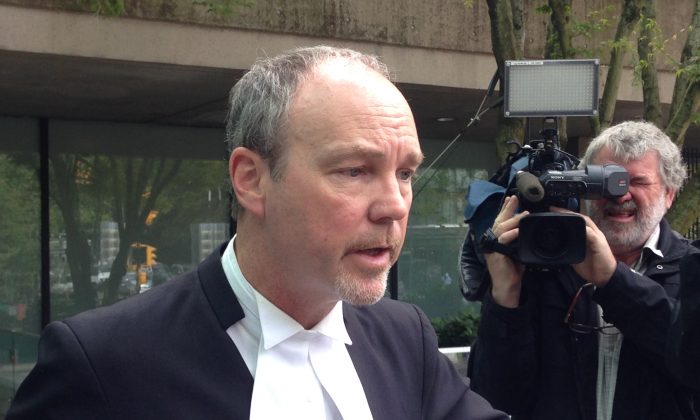 Mark Jette, Su Bin's lawyer, speaks to reporters outside the BC Supreme Court on Wednesday, July 23, 2014. Su is accused by U.S. authorities of being involved in a sophisticated hacking scheme to steal military secrets. (Jacey Shi/Epoch Times)
Canada

Calling the allegations “disturbing,” B.C. Supreme Court Justice Austin Cullen refused bail for Su Bin, a businessman appealing the revocation of his permanent residency in Canada as he faces extradition to the U.S.

“It appears that his connection to Canada is mainly that it is a base for his wife and children,” Cullen said Wednesday when delivering his decision from the bench. “His own presence in Canada is more illusory than real.”

Cullen listed a series of reasons in denying the man’s release, including the vast amount of time Su spends in China, the fact his business is based there and that the man appears to have undisclosed assets outside of Canada. The judge also cited the serious allegations in the U.S. and the man’s international connections.

“In my view, those factors taken in combination raise a significant risk that Mr. Su, if released, will abscond rather than face the prospect of extradition to the United States based on these charges.”

The FBI alleges Su was the mastermind of a plot to electronically steal information from American military contractor Boeing, as well as other defence contractors, and sell it to companies in China. The bureau alleges Su directed hackers to illegally access Boeing’s computers in California to obtain information about the aircraft company’s military projects.

Su was arrested by RCMP on June 28. As he was escorted from the courtroom on Wednesday wearing a red prison-issued sweatshirt, he waved to his wife and her translator.

The court heard Su owns a home worth $1.8 million in Vancouver, with an outstanding mortgage of $1.2 million, and offered only his wife as surety for bail. He listed other support coming from a friend from West Vancouver, his son’s piano teacher, and a former neighbour in Vernon. His two children were born in Canada.

Su’s next court appearance in the extradition case is set for Aug. 27.

While U.S. authorities want Su, Canadian officials are seeking to strip him of his permanent residency status.

While Anderson couldn’t reference his specific case, she said such a status is typically stripped when the resident has spent too much time out of Canada.

Working With Hackers in China

Su is charged in the United States with unauthorized access of a computer and obtaining information, and for accessing a computer to defraud and obtain value. He appeared in a B.C. Supreme for a bail hearing last week.

The affidavit cites a report prepared by the two unnamed hackers in 2012. In the report, titled “C-17 work summary,” they outline an extensive operation that involved them bypassing Boeing’s guarded internal network within months, then stole 630,000 digital files on the C-17 transport jet.

The stolen data included detailed diagrams of the military-transport aircraft as well as flight test documents.

The FBI affidavit notes that the scope and success of the work-summary report could have been exaggerated.

“For example, based on information I have received from other FBI agents who learned about Boeing’s computer network, I have not discovered any evidence that any classified information has been accessed or exfiltrated,” wrote Neeman.

Still, he said there is evidence that some of the hacking of the C-17 information was successful, because the two unnamed hackers obtained emails that made reference to the aircraft.

The FBI affidavit also said the hackers targeted other military technology, such as the F-22 and F-35—the fighter jet that Canada is considering buying.

Su is described in the document as the director behind the conspiracy, telling the hackers which companies to target. Once they obtained the data, Su allegedly tried to sell the information to
Chinese aviation corporations for “big money,” said the affidavit.

None of the allegations have been tested in court. The FBI said the criminal investigation continues. A hearing date for Su’s appeal on the immigration process hasn’t yet to be set.