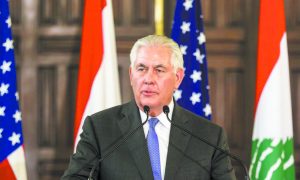 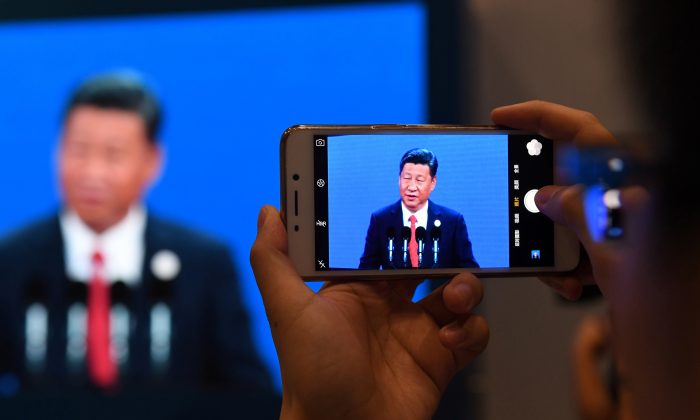 A journalist takes a photo of a live feed of Chinese leader Xi Jinping speaking in Beijing on May 14, 2017. (GREG BAKER/AFP/Getty Images)
Chinese Regime

At a seminar held Jan. 25, Chinese leader Xi Jinping asked all media controlled by the communist Chinese regime to reach all corners on- and offline, covering all subjects and promoting the ideology of the Chinese Communist Party (CCP).

All 25 members of the CCP leadership body, the Politburo, attended a study session at the headquarters of the People’s Daily in Beijing on Jan. 25. The topic of the seminar was the development of “omnimedia,” or “quan mei ti” in Chinese—a concept covering print, television, radio, social media, and cross-medium operation, as reported by the Party-controlled Xinhua.

During the seminar, Xi identified several “key tasks” for the regime’s propaganda. Noting the extent to which everyday life is saturated with information, he described the new media environment as “all-process, holographic media, all-popular, and all-effect.”

Xi asked all Party newspapers, magazines, television channels, and media websites to use new technologies to maximize and optimize the propaganda.

The purpose is to “occupy the commanding heights of public opinion guidance and ideological guidance,” Xi said. The Chinese regime utilizes its media platforms in order to ensure public opinion toes the Party line.

To reach this goal, Xi asked the Party media to use all forms of new media, which includes websites, Weibo, China’s equivalent of Twitter; WeChat, a popular social media platform; e-newspapers, internet TV, and so on.

From a technology standpoint, Xi emphasized the use of artificial intelligence (AI). He asked media to use AI technology when interviewing and gathering information, as well as in news production and distribution.

“We must realize the goal of having news broadcasted [by the Party’s media] covering all channels and reaching readers at all times,” Xi said, according to Xinhua. “Push for the Party’s voice to be received by all types of readers, and control new fields of public opinion.”

Xi added that the Party’s media is the mainstream media of China, and thus must have the ability to bring popular opinion in line with “socialist core values.”

As netizens often lampoon and lambast state media for its aggrandizing and dull content, the Chinese regime’s propaganda corps has a tough job on its hands.

Xi suggested that to make people like state media, the outlets should supply “fresh” news and attractive content. He also urged the media staff to improve their technical levels.

Finally, he asked local governments and Party committees from different levels to invest in state media with favorable policies, funding, and human resources.

Propaganda is one of the most important tasks for the CCP inside and outside China, with the Chinese authorities maintaining strict censorship on movies, TV programs, newspapers, and all other media.

Last March, amid Party restructuring, the main agency in charge of content censorship, formerly known as the State Administration for Film Radio Press Publishing and Television, was subsumed into the Propaganda Department, making the Party directly responsible for managing the censorship board.

Recently, Chinese authorities have stepped up enforcement by cracking down on posts in WeChat, a popular social media platform; restricting the use of blockchain technology that can thwart censorship; and detain dissidents who circumvent the Great Firewall to spread information on Twitter, a blocked website in China.

Outside China, the CCP also maintains a well-oiled propaganda machine.

The Hoover Institute in California published a report in November 2018, that revealed the CCP’s influence within Chinese-language media, universities, think tanks, and government entities in the United States.

The report found that most Chinese-language media in the United States, such as SinoVision, Sino America Times, Sky Link TV, and the China Press, are under Beijing’s control or maintain a pro-Beijing editorial stance.