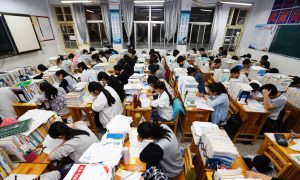 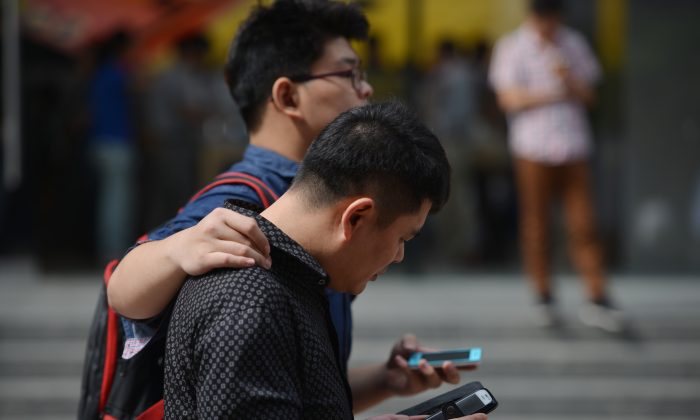 Chinese citizens use their cellphones on a street in Shanghai on Sept. 25, 2013. (PETER PARKS/AFP/Getty Images)
China Human Rights

Human-rights lawyer and dissident Chen Yunke and dissident Ye Jinghuan said their accounts had been hacked and made to tweet ridiculous statements as evidence.

Twitter is banned by the CCP internet police, but many dissidents and other Chinese overcome censors to access it.

Chen, a rights-advocacy lawyer from southern China, defended victims of a tuberculosis outbreak in Hunan Province. The 2017 outbreak led to hundreds of high school students being diagnosed with pulmonary tuberculosis. Three students attempted suicide due to the pressures the illness created with their studies and because of the negligence of the school and the authorities.

Chen’s efforts were suppressed by the local government, which didn’t want the case to be exposed in public or have to provide expensive compensation for the victims. When Chen persisted, the provincial judiciary revoked his license to practice law.

“My Twitter account was ‘hijacked’ by [Zeng and his team] on Sept. 3, 2018,” Chen told Radio Free Asia. “I haven’t been able to log in since then. An agent from the Domestic Security Bureau called me and said I had tweeted on Dec. 21, 2018, to call for an armed uprising from people inside and outside China.”

The Domestic Security Bureau is a Chinese police unit that specializes in handling political cases.

Chen said he didn’t tweet anything about an armed uprising. Instead, between Dec. 15 and Dec. 24, he received six notifications from Twitter via his phone that his password had been changed. Chen believes the judiciary was responsible for the hacking.

“It’s possible that this was done by the provincial Justice Department because the director [Zeng] was previously head of domestic security, as well as state security [the Chinese regime’s intelligence agency],” Chen said.

Ye was detained by Beijing police for eight hours on Dec. 29, after she tweeted posts in support of wives of human-rights lawyers who were arrested in the ‘709’ crackdown. In July 2015, Chinese authorities detained and arrested hundreds of human-rights lawyers, activists, and petitioners from 23 provinces in China, including Wang Quanzhang, Wang Yu, Li Heping, Xie Yang, and Xie Yanyi.

Ye said Dec. 30 that the police asked her to delete all her tweets related to the wives’ shaving their hair in protest of the Chinese authorities’ treatment of their husbands. Having “no hair,” or “wu fa” in Chinese, is the same pronunciation as “no law.” The wives said: “We can have ‘no hair’, but you can’t have ‘no law.’”

Ye said that on the morning of Dec. 29, before she was detained, the police called and threatened to arrest her because she had tweeted “reactionary” posts on another Twitter account registered under her name and cell-phone number. Ye checked the internet and told police that the second account didn’t belong to her. Ye said she couldn’t log into that second Twitter account, according to her Weibo post.

RFA quoted another Chinese lawyer, who only identified himself with the surname Wu, saying that he recently heard of Twitter accounts registered under stolen Chinese phone numbers that are made to tweet actively. “Who knows who is behind the scenes? It must be planned.”

Wu said it’s a new method that the CCP uses to suppress dissidents.