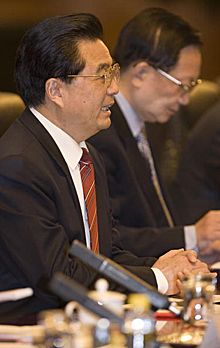 Chinese Leader Hu Jintao believes that corruption will be the downfall of the Chinese Communist Party. (Adrian Bradshaw/Getty Images)
China

On January 15, 2008 Chinese communist party leader Hu Jintao warned that corruption would lead to the destruction of the CCP.

The statement was made during a 35-minute speech at the Second Meeting of the Central Committee for Discipline Inspection of the Seventeenth Plenary Conference of the CCP. Hu pointed out that the burden of corruption on the administration is causing bitterness and violence throughout Chinese society.

According to Hu, increasing levels of corruption could eventually destroy the CCP. He reviewed various regime changes around the world since the 1960s. Other than those due to historical reasons and foreign interference, two main factors were: first, the ruling party's corruption and incompetence, resulted in upheavals among the people, and second, broad-based social problems and economic recession, resulted in disappointment in the people, thereby calling for a regime change.

History has shown that corruption within the ruling party would cause it to stand on the opposite side of the interests of the people, loosing legitimacy of its governance, loosing the ability to galvanize the public, and shake the foundation of the social system. Secretary He Guoqiang of the Central Committee for Discipline Inspection said that the recent increase in corruption-related convictions indicates that corruption and abuse of power are happening on a large scale. Although the public still has some hope for the government and the CCP, both are under tremendous pressure and are facing great challenges. The situation has reached a crisis point.

All Levels of Government Found Corrupt

A total of 4.2 million cases of corruption have been reported at the central, provincial, and municipal levels of government. Most of the cases fall in four major categories: (1) bribery, 3,078,367 reports, (2) debauched personal life, 212,430 reports, (3) abuse of power, 457,436 reports, and (4) other violations, 469,217 reports. Secretary He emphasized that within government entities, there have been malignant criminal gang activities demonstrated in the following areas:

Last year alone, there were 3,144 cases of assassin attacks paid for by government agencies or state-run enterprises.