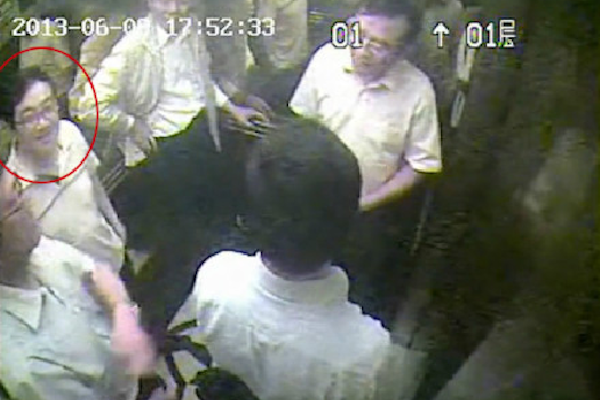 A screenshot of the surveillance video from Shanghai Hengshan Resort shows the judges in an elevator at around 6 p.m. on June 9, 2013. The man on left top is alleged to be Chen Xueming, Vice President of Shanghai Higher People’s Court. (weibo.com)
China

Availing themselves of one of the preferred hotels and tacky entertainment venues of the Shanghai People’s Government, four senior judges in June of this year briefly entertained prostitutes at a dinner party and then individually in their hotel rooms. The matter was uncovered by a disgruntled man who had a case before one of the judges, and obtained surveillance footage from the hotel. His exposure of the grainy and seedy videos online on Aug. 1 has caused an uproar about corruption in the Party and judiciary, and cost the judges their jobs, at least temporarily.

“Chinese Communist Party officials are just like that, obsessing over money and lust. They are countless. How many officials are clean…? Just one sentence: don’t have any hope in them,” said netizen Jungu_Sunny, reflecting a typical emotion on the Internet.

The story has appeared on nearly all the major Chinese news portals and newspapers, and comes during a period when Xi Jinping, the leader of the Communist Party, is attempting to run a “mass line” campaign that involves having officials understand the feelings of ordinary Chinese people. He is also mounting a high-profile media and disciplinary effort whose ostensible aim is to eliminate corruption in the Party. In the process, many Party officials have been exposed and subjected to criticism online, or been taken away by corruption investigators for lengthy, secretive interrogations, during which some have died.

The eight minute video uploaded to the Internet shows four judges entering a private dining room at the Hengshan Resort, which combines a hotel, a restaurant, and a nightclub with the private karaoke rooms beloved by Chinese officials. Soon after, several young women enter and exit the room. The clear overtone in the video is that they are women of the night.

After their drinks, at around midnight the judges retire to their hotel rooms — and the women follow shortly after, exiting between 30 and 90 minutes later, one of them stuffing cash into her bra.

It’s unclear exactly how the accuser, who identifies himself only as “Ni,” was able to obtain the footage. In his telling, he says he went to the hotel and recorded it with his iPad, after claiming to the staff that he had “lost something.” Why the staff would let him remain for three hours recording the highly damaging material is unclear, particularly given that one of the major clients of the resort was the Shanghai People’s Government.

Ni’s chief gripe was against Zhao Minghua, one of the judges at the Shanghai Higher People’s Court; Zhao had, according to Ni, interfered in a case in which Ni was involved, resulting from an economic dispute with relatives of Zhao.

Hours of video were also submitted to the Shanghai Discipline Inspection Commission, the Communist Party organ whose job it is to uncover and punish corruption among cadres.

Ni told the Legal Evening News that aside from debauchery, he also had evidence of Zhao’s financial corruption. Zhao’s wife has no job, Ni says, but the couple owns four properties, two of which are worth over $1 million. That should be impossible on a judge’s salary, Ni charges. Besides, Zhao is regularly invited for dinners and nights of entertainment, some of it unsavory, by friends, most of whom are lawyers. One dinner cost 20,000 yuan ($3,265), Ni says.

“These kind of furtive things are normally done as an individual act. But when it comes to visiting prostitutes as a group, you can see how severe the problem is. It shows that the whole system is rotten; visiting prostitutes is apparently part of the culture in the judicial system,” Shi Da, an independent political commentator focused on China, told New Tang Dynasty Television.

Shi Da pointed to the influence of Jiang Zemin, who before he was head of the Chinese Communist Party from 1989 to 2002 was the Party Secretary of Shanghai, in helping to create a culture of permissiveness toward such behavior by Communist Party members. “Jiang was into this kind of thing,” Shi Da said, recounting an anecdote that is impossible to verify.

After the news of the scandal broke, the Henan local government handed down a new regulation on Aug. 3 that individuals cannot spread surveillance video without authorization. Those who do can be hit with a 30,000 yuan fine, beginning Oct. 1.

Henan authorities didn’t refer to the Shanghai judge scandal, but netizens weren’t waiting for confirmation. “Politicized regulations that protect the rights of the ruling class come out faster and faster, and are implemented better and better,” wrote Shi Pu, a professor of law at Henan University of Finance and Economics.

Another netizen, using the handle Woganjueganjuehuipianren, wrote: “There are no rewards for reporting an issue. Instead there’s even a fine for punishing whoever reports. Some officials are really ridiculous.”