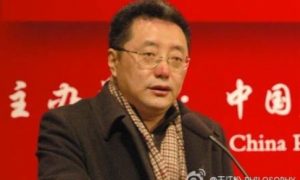 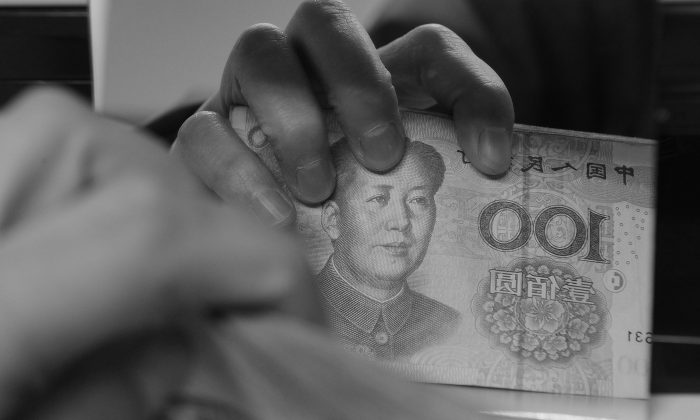 In this file photo a Chinese bank worker counts a stack of 100-yuan notes, on Feb. 27, 2011. According to a study done by the People's Bank of China, household savings rates in China now stand at 50 percent. (AFP/AFP/Getty Images)
China

The People’s Bank of China released a study showing that China’s household savings rate has exceeded 43 trillion yuan (US$ 7 trillion) for three consecutive months, more than doubling the rate of 20 trillion yuan of five years ago. Economic experts are concerned about the impact the rapid increase may have on the overall economy.

Surveys conducted by The People’s Bank of China show that Chinese residents prefer saving their money in banks rather than investing in stocks, bonds, and real estate. Due to increasing family expenditures for housing, education, and healthcare, more households are setting aside precautionary savings.

Liu Kaiming, director of the Shenzhen-based Institute of Contemporary Observation, attributes the surging savings rates to the Chinese government’s printing of large amounts of paper currency in support of its monetary stimulus policy. Despite the increased family savings, Liu cautions that it only applies to a small percentage of households.

“The study shows that although we have a relatively high amount of savings, the savings are in fact owned by a few families, namely, 20 percent of households,” Liu said.

“Indeed, with no social security in China, each family must save money for retirement, healthcare, and education,” Liu said. “Generally, the fast saving rate of growth in recent years is related to the government’s large-scale printing of money, but the 43 trillion yuan savings is not evenly distributed,”

The study also shows that China’s household savings rate has reached 50 percent, which is much higher than the international average of 20 percent. The regime mouthpiece Xinhua noted that China’s savings growth has formed a “seesaw” phenomenon with the fluctuation of the domestic stock market index.

Over the past decade, as the Chinese capital market fluctuated and the stock market index fell, the household savings rate grew rapidly. The narrowing investment channels combined with the already soaring housing prices, the underdeveloped social security system, and the generally pessimistic outlook towards the future contributed to the increasing household savings trend.

Yale University finance professor Chen Zhiwu believes that the high savings rate is a double-edged sword for the Chinese economy.

“Too much currency issued makes the Chinese yuan depreciate, making people’s savings increase significantly on the surface, but actually it fails to reflect the increased purchasing power and wealth level,” Chen said.

“A few years ago, the trend of the state being better off while the public was going downhill was not so obvious, but today people are more and more worried about China’s prospects, and the uncertainties in the economy, society, and politics have increased greatly,” Chen said.

Can this enormous amount of household savings be properly digested by the financial system and provide the necessary driving force to transform China’s economic model?

Professor Chen believes the Chinese state-owned financial system only provides support to local governments and state-owned enterprises. At present, it seems that China’s new leadership has not made major changes since taking office.

“When people put their savings in the bank instead of investing, it will certainly please local governments and state-owned enterprises. But regrettably, the more this is done, the more serious the economic-structure problem in China becomes,” said Chen.

“In the newly released data on China’s macroeconomics, especially industrial output, there isn’t much essential difference between [China’s] new administration and its predecessor in terms of economic policy,” said Chen. “It is still letting local governments play a leading role in more infrastructure investments.”

Professor Chen believes that the public’s expectation of long-term value in household savings will be challenged by the debts of the Chinese government and state-owned enterprises.

“Whether it’s local government, central government, or state-owned enterprises, in the end their debt will certainly have to be paid by the people,” Chen said.

“Local governments’ debt problems are not purely an economic issue; they are definitely a political issue and are caused by the system,” Chen said. “That is why you cannot restrict the power of local government without promoting constitutional reform. The fundamental reason is that executive power and government power are out of control.”

Director Liu also believes that fluctuations in the Chinese economy will make it difficult for general households to survive on bank savings alone.

“Therefore, the majority of Chinese households—more than 80 percent—have very small savings, not enough to withstand any possible natural disasters, diseases, and even the costs of education. This is a very serious problem,” Liu said.