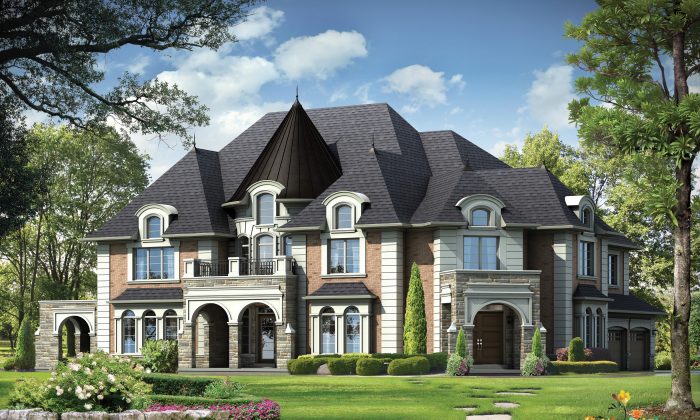 Kleinburg is presently one of the GTA’s best-kept secrets, rivalling areas like Yorkville and Forest Hill, but with the arrival of Kleinburg Crown Estates, it won’t be a secret for much longer.

Kleinburg Crown Estates is a luxury home community featuring 60- and 70- foot lots, while its builders, Caliber Homes and SkyHomes, have remarkably managed to build such opulent and commodious abodes at reasonable price points.

Tucked away in a splendid ravine setting in Kleinburg, you will find Kleinburg Crown Estates, perhaps the pinnacle of the GTA’s current luxury housing selection. Lots this big are unheard of in a market dominated by 18- and 20-foot lots, giving it a distinct air of privacy

Kleinburg Crown Estates is a community where the homes are standalone works of art that are built like custom homes. The homes seamlessly fit into their milieu, too—Kleinburg Village is replete with highly-touted fine dining restaurants, luxury boutiques and spas, the extensive Humber River Trails, the Kortright Conservation Centre, the Copper Creek Golf Club, and, of course, the renowned McMichael Canadian Art Collection.

SkyHomes, too, was nominated for a 2016 BILD award in the Best Model Home category, marking Kleinburg Crown Estates as a formidable collaboration, the likes of which the GTA seldom sees

While pricing starts at $3 million, homes range between 4,300 and 7,840 square feet, making Kleinburg Crown Estates a great value when compared to the GTA’s average price of detached homes, much of which are built on narrow lots and with limited yards. Caliber Homes and SkyHomes are also offering up to $75,000 in free upgrades, in addition to an incredible contest offer in which both builders will each give away a BMW at the end of June 2017 to an eligible purchaser.

“This truly is the apex of luxury-living,” Alda Neves Dubé, Managing Director of Intercity Realty, the brokerage overseeing the sales and marketing at Kleinburg Crown Estates, told The Epoch Times. “It’s surrounded by beautiful natural space as well, which creates a sense of serenity and seclusion. While Vaughan is maturing into a large city, Kleinburg Crown Estates remains an exclusive urban oasis nestled away from all the hustle and bustle of the city, but still close enough to be accessible.”

Kleinburg Crown Estates’ homes are as beautiful on the inside as they are on the outside. The ceiling heights make the interior feel open and inviting. “Craftsmanship will be a defining point,” added Neves Dubé, “because buyers are getting the ultimate in features and finishes and design. These types of homes won’t just hold their value, they’ll appreciate faster than anything else in the market.”

So far, the overwhelming majority of sales at Kleinburg Crown Estates have come from the Chinese community, whom Neves Dubé says is the GTA’s most discerning buyer.

“Vaughan has been incredibly popular with the Chinese community,” she said. “With T&T Supermarket there among myriad other amenities, including the First Chinese Seniors’ Association of Vaughan, that cater to the community, people from the GTA’s Chinese community have been moving to Vaughan in droves.

“The Chinese community tends to be very successful, and they like that success to reflect the places they choose to live. We found buyers at Kleinburg Crown Estates immediately recognized the fact that there aren’t any other similar developments on the market right now, and there’s no saying when the next one will be. That’s why it’s been selling so quickly.”

The ravine lots immediately conjure feelings of placidity, and the homes’ interiors are truly exquisite. Not only are the open-concept spaces extremely large to begin with, but Caliber Homes and SkyHomes are offering the right combination of superior design elements to make the expansive spaces more spacious and elegant.

In addition to smooth ceilings as high as 10 feet, the oversized baseboards, cornice mouldings, iron pickets, oak stairs, unique stone countertops, and custom cabinetry will make the homes look and feel truly stately. Moreover, buyers can choose from an array of flooring and luxury options, like home elevators, theatres, and wines rooms.

Even loggias are an option, should buyers desire a slightly more European flair to their homes.

According to Neves Dubé, the loggias/covered outdoor patios off the kitchens have been a hit with buyers. “You can have breakfast outdoors and not have to worry about rain, she said. “You can enjoy a morning coffee or even entertain guests during the warm summer evenings.”

Vaughan will be the final destination on the TTC subway extension, expected to be completed by year’s end, and it’s going to make living in Kleinburg Village while working in downtown Toronto even easier. Not only that, but as Toronto continues its ascension on a global scale, drawing comparisons to cities like New York and Chicago, there’s so much to enjoy in the city.

“It won’t just make getting to and from work faster, it will also make evening excursions, like going to the Air Canada Centre to watch the Raptors or Maple Leafs, a breeze,” added Neves Dubé. “Imagine catching a Blue Jays playoff game at the Rogers Centre and making it home in less than an hour.”

For more information visit kleinburgcrownestates.com, or visit the model homes and presentation centres in Kleinburg.