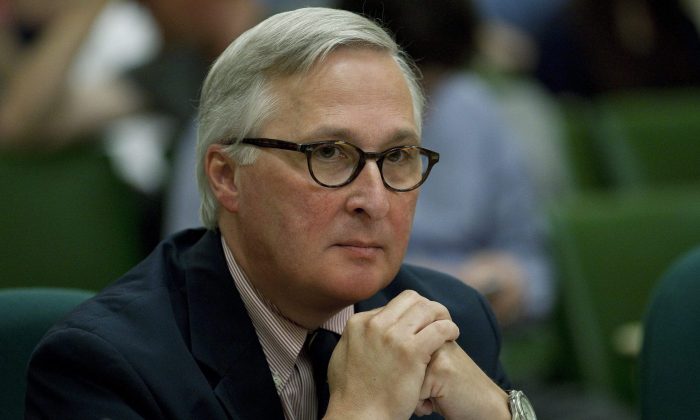 CSIS head Richard Fadden waits to testify at the Commons public safety committee on Parliament Hill on July 5, 2010. The committee hearing was the only time Chinese espionage landed anywhere near the legislative agenda, when several MPs criticized Fadden for raising a red flag about Chinese espionage in Canada. (The Canadian Press/Adrian Wyld)
Canada

Chinese hackers are targeting Canadian firms and government offices with worrisome success but the issue has yet to become a serious policy consideration for any political party. That said, the federal government has, for the first time, pointed its finger directly at the Chinese regime.

The most recent attack made headlines this week when the National Research Council—Canada’s pre-eminent research and development organization—had to shut down its computer systems and start rebuilding its networks after a month of attacks by “a highly sophisticated Chinese state-sponsored actor.”

That’s the wording of the Treasury Board, another critical government department that fell victim to cyber attacks of Chinese origin in 2011.

While some MPs will discuss the issue when it comes up, many are reluctant to speak of it and no party has raised it as a serious issue.

The one time Chinese espionage landed anywhere near the legislative agenda was back in 2010 when several MPs lined up to criticize former CSIS director Richard Fadden for raising a red flag about Chinese espionage in Canada.

Fadden was denounced after voicing concerns that some politicians were being unduly influenced by a foreign power. He singled out China as a concern for the national intelligence agency.

Instead of looking into the allegations, however, MPs lambasted Fadden when he appeared before a parliamentary committee to discuss the comments.

Former Liberal MP Borys Wrzesnewskyj, who sat on the committee, had spent two weeks preparing evidence and questions he hoped would blow the lid off the issue of Chinese influence in Canada.

He had also drafted a motion calling on the committee to look at issues of foreign influence.

But just before the committee was to begin, his line of questioning and motion were quashed by then-Liberal leader Michael Ignatieff. Wrzesnewskyj knew he would be in trouble with his party for raising the issue, but had thought he finally had a chance to put it on the political agenda.

“It’s almost like a chess game. I thought I had it figured out how to bring critically important documentation to the public through the processes of parliamentary committee,” he said in a 2011 interview with Epoch Times.

Another well-placed source tells Epoch Times that changes to the Security of Information Act make it harder for former public servants with direct knowledge of the issue to speak about it at all.

The presence of state-owned Chinese media is one such issue. The Canadian Parliamentary Press Gallery has weighed the issue of Chinese state-owned media like Xinhua gaining membership in the gallery in meetings as recently as April this year.

Xinhua makes little effort to conceal that its reporters file private reports for official eyes only, an activity that raises questions about the role of its journalists.

In Canada, the news agency outsources much of its reporting to Canadian journalists. One of those journalists, Mark Bourrie, warned the press gallery in 2012 that Xinhua had asked him to carry out reporting activities contrary to professional ethics that made him concerned they were using his parliamentary access for espionage purposes.

The gallery debated the issue at the time but delayed any decision. One concern raised in the April meeting was that any move to bar Chinese state-owned media from gaining membership in the press gallery could have repercussions for Canadian journalists working abroad.

The Department of Foreign Affairs, Trade and Development (DFATD) faces a similar situation. Foreign Affairs Minister John Baird is currently in China and reportedly raised the issue of the cyber attacks against the NRC in meetings there.

The Treasury Board set a precedent by openly naming Chinese state hackers responsible for the attacks against the NRC, but with the Chinese regime’s reputation for rampant cyber espionage it likely won’t be the last time.

The federal government is attempting to address the issue by better securing its computer networks.

The Chinese Embassy in Ottawa denies the Chinese regime had anything to do with the attacks.

DFATD has yet to make an official statement on the issue but on Wednesday, amid a flood of tweets about Ukraine, the department tweeted: “Canada considers its bilateral trade and investment relationship with China one of its top priorities.”

The Conservative government has been among the most vocal governments in the world on issues like human rights in China—a topic considered a “trade irritant.” As engagement with China deepens and DFATD continues to encourage Canadian firms to invest in the country and break into the Chinese market, it seems likely that espionage could become another bit of sand in the ointment.