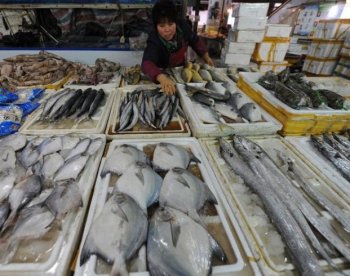 A fish stall in Hefei City. Overuse of antibiotics and fertilizer among farmers is common in China. (STR/Getty Images)
China

By Jing Jin
Print
The reservoir at the back of the home of Mr. Zhang, a Guizhou Province resident, “used to be so clear that we could see the bottom,” he told The Epoch Times in an interview. It was the source of drinking water for the whole village.

But when the reservoir was contracted out to fish farmers they almost turned it into a toxic waste dump. Because they want to maximize profits by breeding far more fish than the natural environment could support, Mr. Zhang said, they were liberal in use of urea, animal manure, and antibiotics, with no regard for how things would turn out down the line.

And scenarios like that happen across the country, according to recent articles in the Chinese media and anecdotes collected by The Epoch Times.

“To increase the fish yield, our boss told us to put a large amount of fertilizer into the lake every week,” says Mr. Long, who works for a fish farmer in Chengdu City. “The clear water soon became green, which is a result of the over production of algae and plankton.”

As well as fertilizer, Long said that using large amounts of antibiotics in animal breeding is a common practice in China, especially in fish farming. It saves the boss money but it makes fish sick.

Professor Xiao Yonghong, director of Antibiotic Resistance Monitoring Network, feels that while another dangerous additive used in China, clenbuterol, only harms a small group of people, abusing antibiotics can have a global impact.

“The consequence of antibiotic overuse is that we may have no drug to use in the future,” Xiao said. “A survey shows the abuse of antibiotics doubles the risk of infection and the mortality rate and raises the price of medical care two to three times.”

The large amount of antibiotic residue not only remains in the rivers and lakes, but also in the soil. According to an industry analysis cited by Modern Life Daily, more than 80 percent of the freshwater for fish farming has been polluted, with pollution from antibiotics being the most serious. Because fresh or live fish being the most expensive, they normally contain more antibiotics.

“If we catch a cold, what antibiotics should we take? Just eating a few crabs will do,” Lu Sheng, vice general manager of Beijing Huaan Maike Biotechnology Co., Ltd., joked to the Daily.

It goes not only for seafood, however. Chinese farmer Mr. Wan told China Business on April 16 that, “In animal farms, farmers use far more antibiotics than lean meat powder or clenbuterol. What the animals are fed most are antibiotics.”

Given the overuse of antibiotics, there is almost no inspection for them in the domestic meat industry in China.

“For exported meat, we have to inspect for antibiotics,” Liu Jiapeng, General Manager of Beijing Huaan, told Modern Life Daily. Foreign countries don’t tolerate such produce, and Chinese exporters generally don’t try to ship it because of the financial losses they could incur.

This means that if the meat is tested and found to have high levels of antibiotics before export, it doesn’t leave port, Liu explained. “The way meat producers handle this is to sell it in China.”